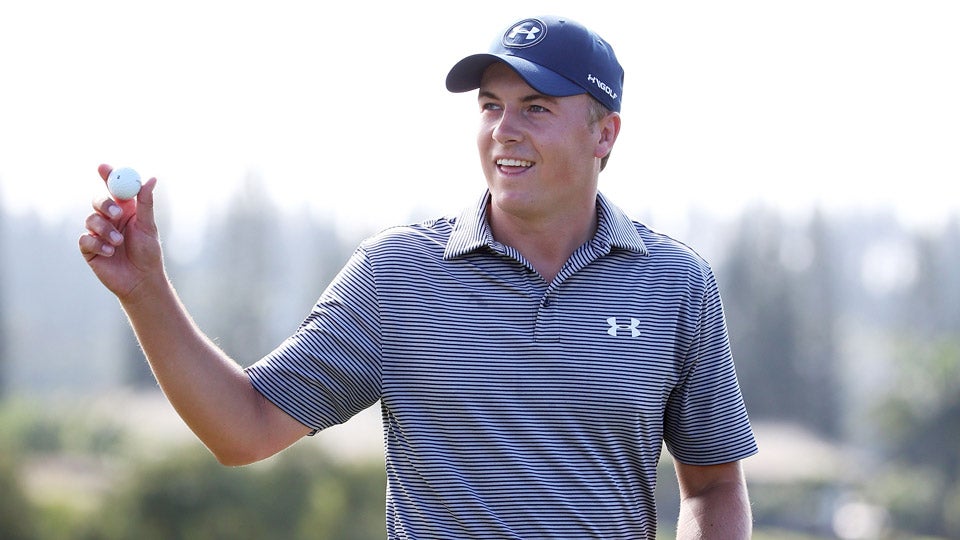 Jordan Spieth during the second round of the 2016 Tournament of Champions.
Getty Images

KAPALUA, Hawaii — There was a funny moment, years ago, when Stuart Appleby was asked what he had to shoot to win.

We haven’t yet reached that point with Jordan Spieth, but we might be getting there. And if Spieth’s peers begin to believe they have to be perfect to beat him — the way some of Tiger’s and Jack’s peers believed — the Tour will further tilt in his favor. Guys will press. They’ll make silly mistakes.

The latest example of this came after Spieth chipped in for eagle from the back fringe at the par-5 ninth hole at the Hyundai TOC on Friday, taking the outright lead at 12 under par through the tournament’s first 27 holes. Playing partner Patrick Reed, the defending champion and first-round leader, mangled his ensuing pitch shot from just in front of the green, smashing his third shot way past the hole and failing to make birdie. Was Reed pressing to keep pace with Spieth? Did he think he had to do something spectacular to beat his old Ryder Cup partner and 2015 Valspar Championship foil? Maybe. Maybe not. Guys miss chips, they miss putts, and they miss full shots. Happens all the time — even to these players.

But would Reed have good reason to think he had to be perfect? Yes.

Zach Johnson and Marc Leishman shot 66 in deplorable conditions in the final round of the British Open, and Louis Oosthuizen made a do-or-die putt at the last to sign for a 69 and join the playoff a shot clear of Spieth. Jason Day shot 20 under par, a record for the majors, to hold off a pesky Spieth at the PGA Championship at Whistling Straits.

And on Thursday, Reed eagled the par-5 18th, going 6 under for his last six, to edge Spieth by a shot in round one at the Hyundai TOC.

Several articles have told us what to look for in 2016. Look for a breakthrough for the U.S. Ryder Cup team. Look for the Rio Olympics to cause a pile-up in the summer schedule. Look for Tiger to take the year off.

Me, I’ll be looking for golfers who look like they’re pressing, and when they do I’ll credit Spieth. One of the surest ways to make a mistake is to get caught up in the belief that nothing short of perfection will do.

“We want to play to win,” Davis Love III said earlier this week. “But sometimes just to get out of your own way is the best way to do it.”

In other words, the best way to win is to “freeroll it,” as Spieth and caddie Michael Greller kept insisting they were doing in 2015.

There’s an art to not trying too hard. One way is to be unburdened by expectations, which is how we came to witness the career performances of underdogs Ed Fiori, Y.E. Yang, Tim Clark, Costantino Rocca and Nick O’Hern in beating Tiger. Another way is to trust that even the No. 1 guy will make mistakes — eventually. That can be a hard thing to trust.

Before his second round Friday, Spieth set up way at the end of the Plantation Course’s driving range, so that his back was to everyone else. He probably didn’t mean anything by it — he set up in the middle of the range on Thursday — but you didn’t have to look hard for the symbolism.

The whole world is at Spieth’s heels. And although they’d never admit it, even his peers can’t help but marvel (at least a little) at his recent run. If they’re human they can’t help but wonder what it means for them, what it portends for the future. The trick is not letting it affect their games.

At the par-5 ninth on Thursday, Justin Thomas was just in front of the green in two. Guys were getting up and down from that spot all day; the hole played to a 4.344 stroke average, tied for easiest of the day. But Thomas flubbed his chip, or gave up on it, his ball finishing some 20 feet short. He seemed to be still thinking about his mistake minutes later, having two-putted for a par, because as playing partner Russell Knox lined up his short tap-in for birdie, Thomas, out of view, angrily Samurai’d his putter through the air.

Again, we’re not quite in the same place we were with Appleby and Woods all those years ago. We can’t say of Spieth, as we did of Nicklaus, “He knows he’s better, they know he’s better, and he knows that they know he’s better.” But with Spieth zooming up the board at the Hyundai so soon after his season for the ages, things are trending that way and everyone knows it.

For those who would deign to stop Jordan Spieth, that’s a hard headspace to play from.