PGA Tour players and caddies are honoring victims of the Charlotte shooting at the Wells Fargo Championship this week. Green ribbons dotted hats and shirts across Quail Hollow on Thursday, representing the school colors of UNC-Charlotte, where two students were killed and four others were wounded on the last day of classes.

Webb Simpson, who lives in the Charlotte area, described his emotions after the shooting.

“My caddie and I were talking about [it] on the third hole today, just how we don’t understand how people can do that. Don’t understand why it keeps happening. I have five kids and I can’t imagine what those parents are going through. We even said that if you get your kids off to college, you kind of wipe your forehead that they’re doing well, they’re probably having the best years of their life — and now they’re gone. So I just, I hate it so much and feel for the parents.”

Simpson attends the same church as a number of students who attend the school, and said there was a text chain that started as soon as the news broke.

“One of our pastors, because we have a lot of UNC-Charlotte kids at our church, he was trying to text as many people as he could to make sure they were safe. This is like, live-texting trying to figure out if any people we knew or the church knew got shot. It definitely feels a lot weirder and worse that it’s a few miles away.”

Jason Day encouraged people to focus their thoughts on the victims, rather than giving attention to the shooter.

“We don’t need to glorify the person that did this at all, we just need to think about the memory of the people that have moved on. It’s frustrating to actually hear that when we’re playing a golf tournament and some young kids that are just starting their lives or are going to start their lives and the families that have to deal with the heartbreak, it’s very disappointing, frustrating when you think about it.” 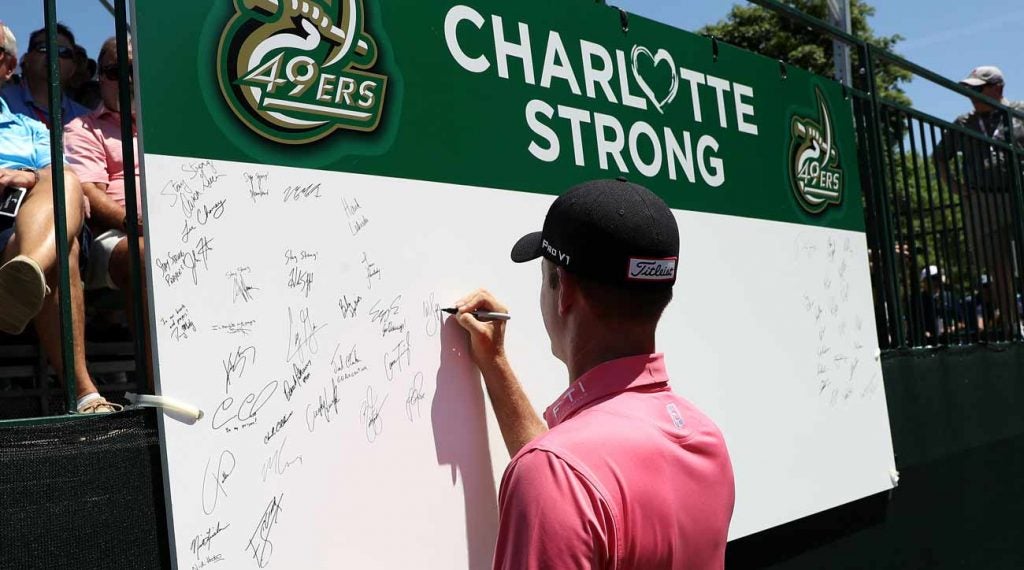 Webb Simpson was among those honoring the shooting victims in Charlotte.
Getty Images

Phil Mickelson was wearing a green shirt on Thursday that matched his ribbon. “I don’t know,” he said when asked about the tragedy. “I just, I empathize with what’s going on and I’m sorry that all that happened.”

Simpson and others stopped to sign the large “Charlotte Strong” boards that tournament organizers placed around the property. Fans signed, too. It was a unifying sight at Quail Hollow.