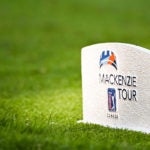 The Mackenzie Tour - PGA Tour Canada will not play this season.

One of the PGA Tour’s developmental tours is canceling its season due to the coronavirus.

Another is playing on.

The Mackenzie Tour – PGA Tour Canada said Friday that it’s canceling its 13-tournament season due to “border restrictions, mandatory quarantines for those entering Canada and gathering restrictions” due to the coronavirus pandemic.

“With growing uncertainty surrounding the border and the 14-day quarantine regulations, among other factors, we’ve weighed all of our options and concluded that it is not feasible to play this summer,” Mackenzie Tour executive director Scott Pritchard said in a release.

“We also wanted to be considerate of our players and their desires to play golf,” Pritchard added. “Understanding the complexities that this pandemic has caused, we knew it wasn’t fair to leave our members in positions that might prevent them from pursuing other playing opportunities elsewhere while waiting to see what transpired in Canada.”

Another one of the PGA Tour’s developmental tours, the PGA Tour Latinoamerica, told its players on Friday in an email that the Canadian Tour’s decision will not affect its season, and that it plans to release a new schedule sometime in June.

“As you may have heard, the Mackenzie Tour – PGA Tour Canada unfortunately announced the cancellation of the 2020 season due to Canadian-U.S. border issues and other problems stemming from the Covid-19 pandemic,” the email said. “The Mackenzie Tour’s decision, however, does not change or impact the 2020-21 PGA Tour Latinoamerica season and our plans to return to play this fall (the U.S. fall), with the goal of a 14-tournament season that will potentially conclude in late May or early June 2021.

“Over the last few weeks, we have made great strides with our host organizations and commercial partners on our revised tournament dates, and we should be able to share with you our new schedule sometime in June.”

The Mackenzie Tour – PGA Tour Canada was scheduled to begin on Thursday with the Canada Life Open. The Tour said Friday that player status for next season will be based on results from the 2019 season, while players who advanced through three qualifying events will retain that status, and players yet to compete in the four other qualifying tournaments will be guaranteed spots at a 2021 qualifying site.

The PGA Tour Latinoamerica had played one tournament, the Estrella del Mar Open in early March, before play was stopped. The PGA Tour and the Korn Ferry Tour are both scheduled to resume play on June 11.

“We had built a lot of momentum coming into this season, and we were excited to continue making a positive impact in the communities where we play, while also providing opportunities for our players to progress to the PGA Tour,” Pritchard said.