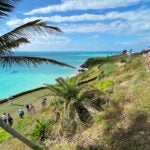 The Bermuda Championship will go on without a full field.

First it was 2019 Butterfield Bermuda Champion Brendon Todd who announced that he was withdrawing from this year’s event. Todd was out, and Heath Slocum was in.

Port Royal Golf Club is a dream destination for any golf traveler, a seaside course with jaw-dropping views and a memorable Robert Trent Jones routing. But when it came to retaining professionals, things were proving tricky.

Takumi Kanaya finished top 10 at last week’s Zozo Championship, earning his place in the field. But then he declined his invitation — a sign of things to come. Soon the alternates who had initially accepted places in the Port Royal event started revoking their acceptances, too.

Bradley was in, then out. In came Jonathan Kaye and Frank Lickliter II. Then out they went. Tommy Armour III got in, as did Will MacKenzie. One by one, they each dropped, too. There’s room in here for a Bermuda Triangle joke about mysterious disappearances but folks, we’re steering clear of that one and sailing for safer waters.

Rob Bolton, professional tracker of all things nitty-gritty at the Tour, documented the action:

Others declined before their number had even been called. Jason Gore of USGA fame. Smylie Kaufman of Spring Break fame. Omar Uresti of PGA Professional fame. The 132-player field is already smaller than summertime Tour events, due to daylight this time of year, but the number of eligible players was shrinking quickly.

When an opposite-field event struggles to fill its tournament field, it can dive into the reserves, inviting folks with lesser PGA Tour status by dipping into Nos. 151-200 on the previous year’s FedEx Cup list. That would have included folks like Rafael Campos (No. 151) and Tom Lewis (No. 156). But the Bermuda Championship has (through some dark irony) been upgraded to a “full-field” event each of the past two years, given the cancelation of the WGC-HSBC Champions, so that provision does not apply.

The PGA Tour told GOLF.com there is no plan to fill spots following WDs.

One fill-in was left: Brendon de Jonge. He got his spot when Paul Barjon dropped out. The field was full, 132 players for 132 spots.

But then they began disappearing. Micheel was out. Stankowski? Out. Cody Gribble decided he was all set, too. In other words, those players waiting by the phone weren’t actually waiting by the phone. They weren’t coming. The PGA Tour is the highest level of professional golf on the planet; thousands of golfers would give anything for just a single appearance at the game’s highest level. Suddenly the Tour’s 132-player field had just 127 players left — and dropping. What was the deal with the WDs?

Why go to Bermuda?

We’ll get to the reasons NOT to go in a minute, but first: Wow. Where to begin? Bermuda is an island paradise, boasting glorious sand beaches, charming small towns and a variety of fun golf courses. There’s also a low crime rate, reliably warm weather and the opportunity to ride a scooter on the left side of the road (visitors generally aren’t allowed to rent cars).

But if you’re a professional golfer, the attraction is much simpler: Points. Money. Exemptions.

When the WGC-HSBC Champions was canceled due to Covid-19, the Bermuda Championship was upgraded to a full-field event. That means 500 FedEx Cup points for the winner, the same as Rory McIlroy earned in a star-studded field in Las Vegas two weeks ago. It also means the winner receives an invitation to the Masters, in addition to the two-year exemption on the PGA Tour.

Betting favorite Matthew Fitzpatrick acknowledged that the full slate of points was a factor in his decision to play.

“Definitely,” he said on Tuesday. “I don’t think I’ver ever been a favorite for a tournament before. It’s always nice, but for me what was also a big draw as well was that it’s gone to the standard 500 points for a win. It gives me obviously a great chance to get my season up and running and get off to a great start to try and make Tour Championship next year.”

The relative weakness of the rest of the field should also make a Bermuda start more attractive to fellow players. World No. 24 Patrick Reed is the highest-ranked player in the field. Brian Gay and Brendon Todd have helped recharge their careers with victories at Port Royal the last two seasons. There’s a good chance we’ll see another off-the-radar player win this week — because most of the competitors are off the radar.

Oh, and there’s the $6.5 million purse, upgraded from $4 million a year ago. That means the winner will receive nearly $1.2 million. Not half-bad for a week’s work in paradise.

So why not go?

For one thing, Bermuda isn’t the easiest place to get to. The island (technically 181 islands, but the Main Island gets most of our attention) sits some 600 miles off the coast of North Carolina, which is the nearest mainland. Sure, there are plenty of flight options — but if you’re a Tour pro that needs a proper tune-up to get tournament-ready, it might be tricky to get on island and scope Port Royal in time to feel prepped. Travel is especially challenging from Japan, the site of last week’s Zozo Championship. The two islands aren’t exactly in close proximity. And there are come extra complexities flying to Bermuda in particular, like this one: Gay, the defending champion, was among a group of players left behind on Monday as his plane was deemed “too heavy” to take off with everyone aboard.

Bermuda’s Covid-19 policies are also proving a major deterrent for some golfers. To participate in this week’s event, players were required to show proof of vaccination or have undergone a 14-day quarantine period. The PGA Tour does not require its players to be vaccinated and reported that just over 70 percent were vaccinated as of early August. They have not released an update since then, but the requirement makes it extremely unlikely that unvaccinated players would make the trip.

Last-minute additions to the field faced further challenges because Bermuda requires vaccinated individuals to provide a negative Covid-19 test before arriving on the island, too. Players are then re-tested upon arrival in Bermuda. But a pro who may have chosen to add the event last-minute could have been dissuaded by the timetable of acquiring a negative test and still arriving pre-tournament.

While most pros haven’t spoken publicly on the matter, Charlie Beljan took to Twitter several weeks ahead of the event to protest the island’s requirements, referring to the pandemic as a “hoax” and adding, “F— Bermuda and all you Nazis pushing this agenda.“ The tweets were later deleted.

Former Bermuda Premier Michael Dunkley, himself an avid golfer, told the Royal Gazette he was disappointed in Beljian’s comments and how they reflected on the island and its event.

“The PGA Tour was up front with their players well before that,” Dunkley said. “If you were going to come to Bermuda you had to be vaccinated or quarantine for 14 days. So at the last minute for the gentleman to say that he is withdrawing because of that, he had ample notice to make a decision and discuss it well before now.”

For many Tour pros, this is distinctly the offseason. Coming off a stretch of seven majors in 14 months, this is the time of year they’d set aside for family, recovery, relaxation. If they’d known the field would be this ripe for the taking, perhaps they’d reconsider, but a complex last-minute trip to Bermuda is simply more than many wanted to plan.

The betting markets will tell you that Fitzpatrick is the favorite at roughly 11-1, while Christiaan Bezuidenhout (16-1) is next, followed by Reed (20-1) and trendy pick Mito Pereira (20-1).

There are also plenty of names from golf days gone by, including John Senden, Ricky Barnes, Ted Purdy and Arjun Atwal.

But the best entry of all is local pro Brian Morris. The 53-year-old Bermudian pro has terminal Stage 4 brain cancer that he’s been fighting for years; this week he’ll live out his dream.