How to read the grain on Bermuda-grass greens 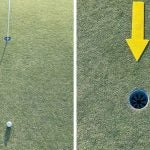 Knowing some common traits of Bermuda-grass greens will help you read your putts.

Grain isn’t much of a factor on bent grass greens because the blades of grass grow nearly straight up, while Bermuda grass lays over in a particular direction. Bent grass greens are usually easier to read because the putt will hold its line for the entirety of its roll. They also tend to be cut tighter and therefore will break more than Bermuda grass, given an identical slope.

I grew up in the Northeast and my eyes became accustomed to seeing a lot of break. When I moved to Florida, the Bermuda-grass greens were generally slower and didn’t break as much. It took me a while to get used to aiming for less break than I instinctively wanted to on similarly sloped greens.

If you play golf on Bermuda greens, it is important to know where West is, or where the sun sets. On a relatively flat green, the grain will almost always grow toward the West. If the greens have a lot of slope, then the grain typically grows in the direction of the slope. The old saying goes, “Where the water flows the grain will grow.” This usually overrides the effect of the grass growing towards the West.

Another simple method is to look at the cup itself. You should notice that one side of the cup looks rough and slightly beaten up. This worn-out grass is showing you the direction that the grass is growing. The ball will travel toward that side of the cup.