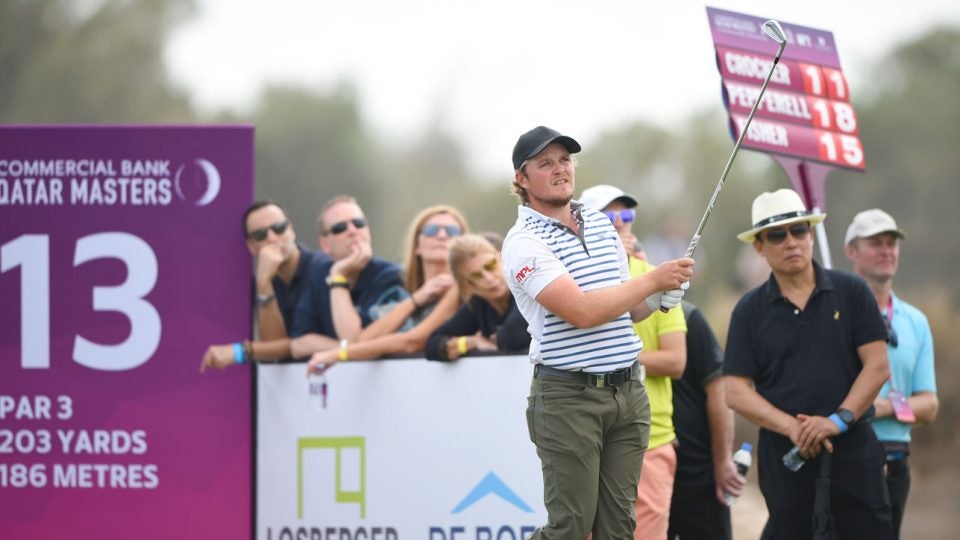 Eddie Pepperell tees off on the 13th hole during the final round of the Commercial Bank Qatar Masters.

The 27-year-old Englishman held off a spirited challenge from compatriot Oliver Fisher, who needed a third successive birdie on the 18th hole to force a playoff, but had his putt from six feet slip past the hole for a par.

The No. 154-ranked Pepperell made things difficult for himself with a bogey on the 15th hole, but hit a superb wedge to three feet on the next to get back to 18 under again.

Fisher, who appeared to have fallen out of contention with three bogeys starting on the third hole, stormed back with birdies on the 14th, 16th and 17th holes.

On the last, Pepperell laid up with his second into the thick rough, made wet and unwieldy by rain in the Qatar capital, but found the green in three and two-putted for the win when Fisher missed his birdie putt.

“I did the things I needed to do, I didn’t play fantastic but I won ugly and for the first win to be ugly is good. Hopefully, I’ll have some prettier ones in the future,” said Pepperell.

“I knew I was playing well, especially tee to green, so I expected a lot of myself this week and I guess to pull it off is amazing. When Oli birdied the 17th, that was when it really caught up with me that I was only one ahead. I was in my own zone, I knew I had a couple of shots of lead but Oli did great. It was a tough front nine for him and I had to stay right in my own way and out of the two guys’ way because they were struggling a bit and it’s sometimes easy to get dragged into that.”

Fisher was disappointed, but saw the silver lining in the way he fought back.

“It went all the way to the last hole which, after my front nine, was what I was hoping for on the back nine,” said Fisher, who won the 2011 Czech Open, but recorded his first top-three finish since the 2014 Africa Open.

“I hit a lot of good shots coming down the back nine and gave myself a lot of good chances, but there were just too many bogeys today, four in total, so you’re never going to win a tournament making that many mistakes on a Sunday. But at least I pressed him all the way.”

Italian Renato Paratore (66) had the low round of the day and finished tied for fourth place at 15 under par, where he was joined by the Spanish pair of Gonzalo Fernandez-Castano and Pablo Larrazabal along with Gregory Havret of France.