Word got out in the leadup to the PGA Championship that Tommy Fleetwood was down to his last set of Nike VR Pro blades. Since Nike’s exit from the hard-goods industry, complete sets of their irons had been dwindling. But Paul Casey still had a set at home — and reportedly told Fleetwood he wouldn’t sell. “They are as rare as rocking horse poo,” Casey told the PGA Tour at the time. “And I will not sell them to him. Or put it this way, he hasn’t offered me enough money.”

This week, Paul Casey joined GOLF.com’s Drop Zone in the above video to clear the air on the matter.

“To the point, we both used a Nike blade which was the VR blade,” Casey began. “They were Endo-forgings out of Japan, finished by the great Mike Taylor — who now has a company called Artisan Golf in Texas — and they are beautiful. Tiger used a version of those, and Tommy is still using his set.”

Where the story goes wrong, Casey said, is in the details: Fleetwood doesn’t actually want Casey’s custom-stamped irons. “I have a brand new set, but they have ‘PC’ stamped on the back and I kind of wanted them,” Casey said. “They were so beautiful and it was, ‘am I going to use these things post-Nike exiting equipment business?’ And I chose not to use them and the story got out.

“In fairness, Tommy doesn’t want them because he knows they’ve got ‘PC’ stamped on them. And he could go to Mike Taylor and get another set ground for him, because I believe Mike’s got some blanks that he could do that. But the story keeps going.”

So is Casey ready to bury the story? “Yeah,” he said conclusively. “It’s done.”

You can watch the complete episode of the Drop Zone below. 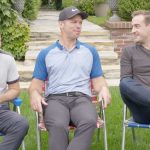 You may also like The Drop Zone Ep. 5 ft. Paul Casey: Respect the office!