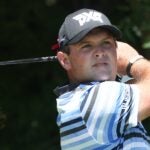 Patrick Reed hits his tee shot on Friday on the 6th hole at Colonial Country Club.

These aren’t typical questions of Patrick Reed. And this hasn’t been a typical year for him. On Friday, he was again at the top of a leaderboard — in fourth, one shot back of three players, after two rounds at the Charles Schwab Challenge — but it had been a while.

Say what you will about the 31-year-old Texan, but you can’t dispute the consistency. Since the 2013 season, he’s won in every campaign, and nine times in all. Since the 2014-15 season, he’s ranked no worse than 25th in Strokes Gained: Total. This season? Zero wins. Just one top 10, in October. And he’s 167th in SG: Total. The player who once believed he was a top five player in the world is now, in fact, 38th.

So yeah, in response to question one above, Reed’s frustrated. And yeah, he believes he got away from the player he is. They actually tie together.

“You could ask every player out there, the guys who don’t win the golf tournament, obviously, everyone second place and worse, they sit there, they can nit-pick the heck out of it and find at least three shots every round if not more that they should have had,” he said.

“But that’s where — you’ve just got to, for me, just I’ve got to stay with the process. I feel like I’m now on the right track of being here and being in the moment, in the present, and owning my golf swing and owning the shots I’m trying to hit. The more I get comfortable that way, the more I start seeing shots, the better it’s going to be, not only on ball-striking but on putting, chipping and just results in general. Golf is a funny game. One day you go out there and you feel like you did nothing well, you shoot 62, and the next day you go out and you feel like you did everything absolutely perfectly and nothing goes in and you shoot a solid 80. It’s just kind of one of those things.

“I feel like the game is trending, is definitely where it needs to be, just need to start seeing these numbers that kind of add up to how I’m playing and how the score is supposed to be.”

“Owning my golf swing” is key here. Reed admitted on Friday that he was going through a swing change this year, and he got “too golf swing on the golf course.” You know the saying paralysis by analysis? This is that. It can be debilitating for a player who prides himself on feel, like Reed. And it can even leak elsewhere — Reed’s one of the best short game players in golf, but this year, he’s 78th in SG: Around the Green; last year, he was seventh.

But, as he said, he believes he’s “trending.” At the Charles Schwab, he’s shot a pair of 66s, with just one bogey each day. And the Strokes Gained numbers are back in line: fourth in total; third around the green.

Has something clicked? Two rounds, of course, don’t win a tournament. But they’re also a start.

“Earlier this year, I got away from my blueprint, which is get out on the golf course, a gamer and see shots, feel shots around the golf course,” Reed said. “And using your short game. Seemed like earlier this year I’d kind of get there and try to start playing positions in the swing rather than curves and shots I see.

“I feel like now we’re back to where we’re supposed to be, back to the kind of golf I normally play, now just need the numbers to keep on producing.”