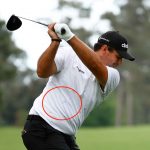 Patrick Reed's azalea-stained shirt in the second round.

The challenges of Augusta National have been known to leave players black and blue.

But pink and purple?

That’s the predicament in which Patrick Reed found himself in the second round of the 2021 Masters after depositing his tee shot on the par-5 13th hole into the trees and azaleas that guard the left corner of the dogleg. It’s a common outcome for tee balls on 13, where players try to sling their drives around the corner, but Reed wasn’t about to give up on his ball without a spirited hunt.

Into the shrubs he went.

When he emerged, Reed hadn’t recovered his ball but he did come back with something else: an azalea-stained outfit.

“I started the hole with a pure white shirt and afterwards I had purple and pink and every other color on it,” Reed said Saturday afternoon. “Looked like I had a tie-dyed shirt on because I was having to dig trying to find my golf ball.”

He was exaggerating but only slightly:

This wasn’t the first time this week that Reed tangoed with Augusta’s signature flora on 13. In the first round, he pulled his second shot left of the green, his ball disappearing into a nestle of azaleas, from which he had to take an unplayable lie.

“My wife [Justine], she always says how pretty the azaleas are,” Reed said. “Well, I don’t really find them that pretty this year because I keep on being in them on that hole.”

Alas, not in the third round! On Saturday, Reed hit a perfect second shot from the fairway on to the green that left him 30 feet left of the hole. He two-putted for a birdie 4.

Reed, who won the green jacket in 2018, shot 70 in the third round. He’s at one under for the tournament, currently tied for 13th.