Patrick Reed, aka Captain America, channeling his Ryder Cup superpowers at the Open

ERIN, Wis. — A United States Ryder Cup assassin with a patriotic nickname who dresses like an American flag and wears cowboy boots is coming alive in golf’s national championship.

Patrick Reed shot a seven-under 65 Saturday to surge into contention in this how-low-can-you-go 117th U.S. Open. He was the third-round headline until Justin Thomas shot 63 to record the lowest round in relation to par in U.S. Open history.

Still, Reed is only four back, and his topsy-turvy round was full of positives.

He made eight birdies but hit only 12 greens. He hit an awful approach on eight then holed out for birdie. Four holes later he chipped in for birdie again. Reed made birdie putts totaling 34 feet on 14 and 16. He used his putter only 23 times. There’s been no better Ryder Cup player for the Americans over the past four years. Reed’s latest heroics came last year at Hazeltine, when he went toe-to-toe with Rory McIlroy during Sunday singles. There was screaming, yelling, shushing, waving, even bowing.

But can Reed contend in a major? He has yet to do so.

“You always can take that fire from Ryder Cup and use it in other events,” he said. “But you’re talking polar opposites. You’re talking one-on-one competition against 155. I think the biggest thing is not getting ahead of yourself. Every time I’ve been in majors so far, my first two years, I’ve put so much emphasis on them and tried so hard at them that I kind of got in my way.”

Reed has never finished in the top 10 at a major, although he has finished 12th, 13th, 20th and 22nd. He’s won five PGA Tour events, including a World Golf Championship and a FedEx Cup playoff event, which is also his most recent victory, the 2016 Barclays.

But no resume is complete without a major title. Ask Lee Westwood and Colin Montgomerie. Or Sergio Garcia and Henrik Stenson, who went what felt like an eternity before finally breaking through. Reed is one of four players currently ranked among the top 20 in the world who have yet to record a top 10 in the majors, but his 13 major starts is tops among the oh-fer group.

“Every time I got to the majors, I worked too hard Monday through Wednesday,” Reed said. “So by Saturday I was tired. And then also I was living and dying by every golf shot, every putt. Coming into this year I was just like it’s another golf tournament. Show up. Do what you do on a normal event and just play golf.”

Yet after 36 holes he teed off only six back of the leaders, many of whom, like him, are major-less.

On Saturday, Reed wore his navy blue pants from the 2016 Ryder Cup. He’s been dressed like that all week. (“This week it’s red, white and blue,” he said. He says his wife, Justine, is behind his wardrobe.) 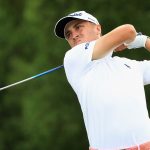 You may also like Justin Thomas shoots 63, breaks record for lowest score relative to par in U.S. Open history

He made birdies on six, seven and eight, then rung up four more birdies in a five-hole span on the back nine. He barely missed chipping in for birdie on 17, and his knees buckled when it didn’t fall. On 18, a superb shot from the bunker left him a short birdie putt for a 64, but he lipped out.

Reed couldn’t believe it. His knees gave out again. He smiled, wiped his face and looked at his caddie, Kessler Karain. Sixty-five.

“Oh, for sure,” Reed said when asked how much it would mean for him to win the Open. “I mean, it’s where we’re from. It’s home. To go out and just play well tomorrow and have a chance to win the golf tournament would mean a lot.”

After shaking hands with playing partner Martin Laird, Reed stopped and took one last look at his missed putt for 64. This time from the other side. He slouched and cocked his head. He was thatclose.

After 54 holes, so is his first major title.