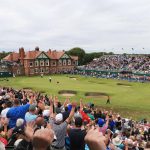 The R&A announced it will allow 32,000 fans on site per day at next month's Open Championship at Royal St. George's.

The R&A said that the Open Championship will allow 32,000 fans on site per day during next month’s tournament at Royal St. George’s.

“We are pleased to now be able to proceed with our plans for having a significant attendance at this year’s Championship,” R&A chief executive Martin Slumbers said in a statement. “These fans will play a huge role in creating a very special atmosphere as the world’s best players compete for the Claret Jug and we look forward to welcoming them to Royal St George’s.”

The announcement comes despite the British government delaying the next planned easing of restrictions in the country.

“I would like to acknowledge the support and understanding we have received from the government and public health authorities, fans, players, our patrons and partners, as we have worked through this extremely challenging process,” Slumbers said. “The Open is a very special championship in the world of sport and we are fortunate that so many people care as deeply about it as we do.”

The 149th Open Championship was originally planned to be played in July 2020 but was canceled due to the Covid-19 pandemic.

Shane Lowry won the last Open Championship in 2019 as he cruised to a six-shot victory at Royal Portrush, in Northern Ireland.

You can read the full statement from the R&A here.