The first time I went one-on-one with Tiger Woods… 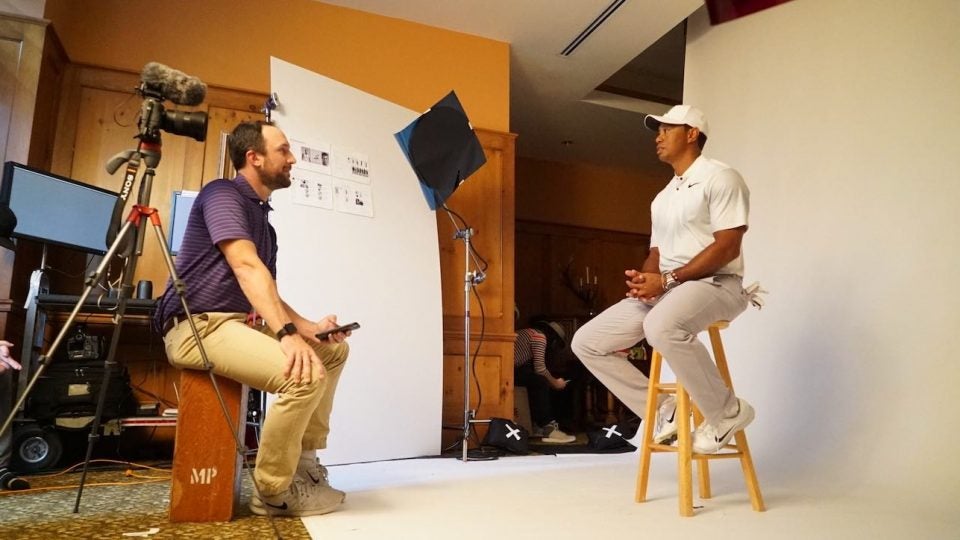 Every kid dreams of going head-to-head with their idol. Growing up, was it always hitting a fadeaway jumper in Michael Jordan’s grill or taking Nolan Ryan deep in the bottom of the ninth. And then Tiger Woods came along.

Like most millennials who came of age in the late 90s, Tiger reeled me in at the 1997 Masters. I still remember sitting spellbound on the couch as a baby-faced 21-year-old torched Augusta National on Sunday afternoon. I was Tiger-obsessed. Each time I took to the course, the crucial putt on 18 was always to vanquish Tiger at Augusta. The final tally is up for debate, but I’m pretty sure I have more green jackets than Big Jack and Tiger combined.

Unfortunately, the older I got, the more those imaginary moments of glory started to fade away. By the time I hit my early 20s, I’d come to the realization that I was a strong single-digit handicapper with a serviceable short game. The dream of playing against Tiger was just that: a dream.

So I shifted my sights towards another equally tall task — trying to find a way to cover Tiger from inside the ropes. I gave myself 10 years from the moment I received my diploma to make the dream a reality. For some crazy reason, Golf Digest was desperate enough to take a chance on a golf-mad graduate to help run their website. Suddenly, I was living my dream.

Fast forward a decade, to 2017, and I’m now covering equipment for the PGA Tour. It’s late in the year and I’m milling around the house one afternoon when I receive a call from TaylorMade’s communications team. Product launch season is approaching, so I’m fully expecting this to be a discussion about new gear, until they hit me with something I wasn’t expecting.

They have an opportunity for an exclusive one-on-one interview with a big-name player, only they won’t tell me who it is — at least not yet. I can appreciate the build-up, but there’s already a problem: the interview with the mystery player is supposed to take place the same week I’m scheduled to be on an anniversary trip with my wife. Not good.

At this point, I pray to the golf gods that it’s anyone but Tiger, because I don’t want to have to tell my wife we need to cut our week of marital bliss short for an in-person interview with the guy who made me fall in love with the sport. 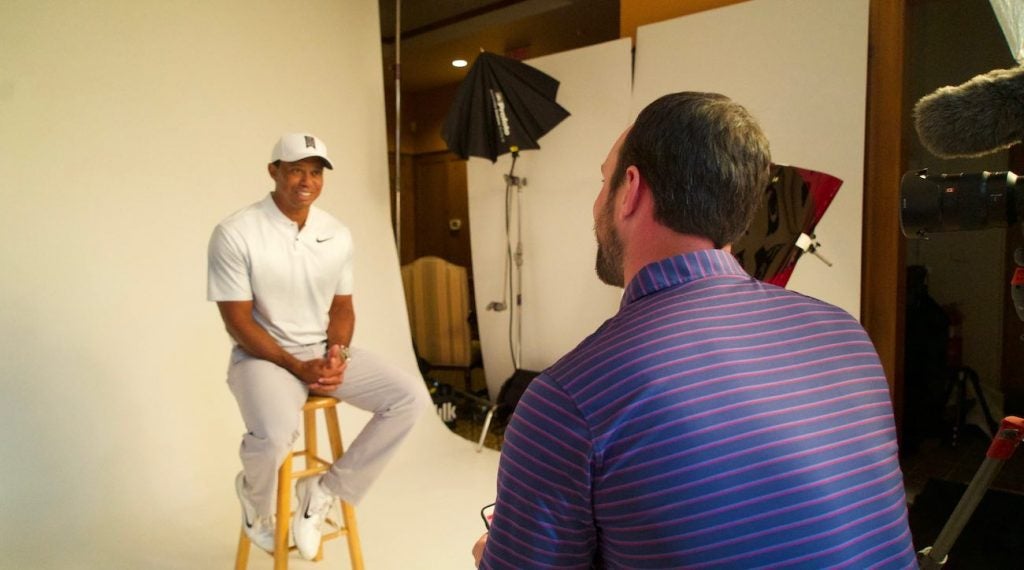 They inform me it’s a one-on-one sitdown with Tiger. Of course.

By this point in my career, I’ve had the opportunity to sit in on Tiger interviews with a gaggle of equipment scribes, but the one-on-one has proven to be elusive, for obvious reasons. The G.O.A.T. doesn’t sit down with just anyone.

With my heart in my throat — I’m a nervy guy by nature — I blurt out, “I’ll be there.” My wife will understand, right?!

Somehow, someway the golf gods threw me a bone and the interview turns out to be the day after I get back to the States from our vacation. I cancel my connecting flight from Miami to Dallas and make the drive to Jupiter. That’s when the nerves start to kick in and I start running through my questions over and over again in my head.

I remember getting halfway decent sleep and rising before my alarm to prepare for the drive over, never even stopping for a bite to eat.  I still recall in vivid detail rolling up to the casitas at Medalist and spying Tiger’s bag with “Frank” peeking out. Suddenly Tiger appears, skin-tight Nike shirt and all; it no longer feels like a dream.

Before sitting down for the interview, I had the opportunity to watch him go through his first official testing session (you’ve likely seen the footage before) since joining TaylorMade. Over the next hour, I observe Tiger pick up on slight differences in iron CG after one swing, notice a minuscule bubble under the grip (I had no idea this was even possible) and take big lashes with the driver with only a handful of people around. I like to believe this is what it might have been like to watch Monet paint in his studio in Giverny.

On a balmy December morning, Tiger even cracks a few jokes: “Now you know what it looks like to see a fat man sweat,” he says after taking another lash with the driver. Thing is, Tiger’s physique makes me believe he could hit the field and play strong safety for the Miami Dolphins that afternoon.

Within a few minutes after the last ball is struck, I’m told it’s nearly time to go one-on-one with the man. I walk over to the clubhouse and head upstairs to a room that’s been set up for a shoot, and settle into a comfy leather chair. It’s at this point my head starts spinning. Do I have enough questions? Are any of them going to rub Tiger the wrong way?

Just before I continue down the road of self-doubt, Tiger appears from behind the door. I freeze. He plops down into the chair next to me and I’m not quite sure what to do. If you were to ask my wife, she’d tell you I don’t exactly excel at small talk. I have a tendency to dominate the conversation when I’m nervous. And, boy, am I a ball of nerves at this very moment.

The spot where I’m going to conduct the interview isn’t quite ready yet, meaning there’s some time for idle chitchat, so I take a chance. “Hey Tiger, you think Bryce Love is going pro?” It’s a softball question for the Stanford alum about a guy he surely knows. And just like that, I’m talking football with Tiger Woods. Things get hazy at this point, but I remember the conversation including a debate about quarterbacks David Carr and Russell Wilson, and whether Carr had a better longterm future than Russ. (We both agreed he did not.)

For the next five minutes, I’m basically talking sports with my buddy. If my buddy also happened to be my childhood idol. Then I remember I still have an interview to conduct.

Tiger and I head around the other side of a heavy white sheet that’s hanging from a couple of clips — a blank background for the shoot — and prepare to get started. This is eight months after Tiger has undergone his fourth back surgery (this one a spinal fusion), so I’m all for keeping him happy and comfortable and doing the interview from some comfy chairs, but Tiger insists he’s just fine sitting on a stool positioned in the middle of the room for the next 30-plus minutes.

I’m not sure if it’s the fact we got to feel each other out before the interview, but Tiger is in great spirits. We talk about the clubs he used growing up, laugh at his hilarious impression of longtime clubmaker Mike Taylor, and even get into how the equipment industry would look if a governing body didn’t exist. I’m vibing with a fellow gearhead. This doesn’t feel like real life.

And then the interview ends.

More than 30 minutes talking shop with Tiger Woods in what feels like 30 seconds. Thankfully, Ollie Neglerio, TaylorMade’s head of content, was kind enough to set up a camera behind me to record the interview — and capture a few snaps. These are things I wasn’t even thinking about when I walked into the room, but to this day, the interview footage and photos remain some of my most cherished items from my time in the industry.

My wedding day and the birth of my children remain the most impactful days of my life. That will never change. But from a work perspective, this interview — the amount of time and access I was given to Tiger in a one-on-one setting will likely never happen again — is the pinnacle.

It’s almost as memorable as the time I drained a 30-footer to beat my idol when I was 14. Almost.