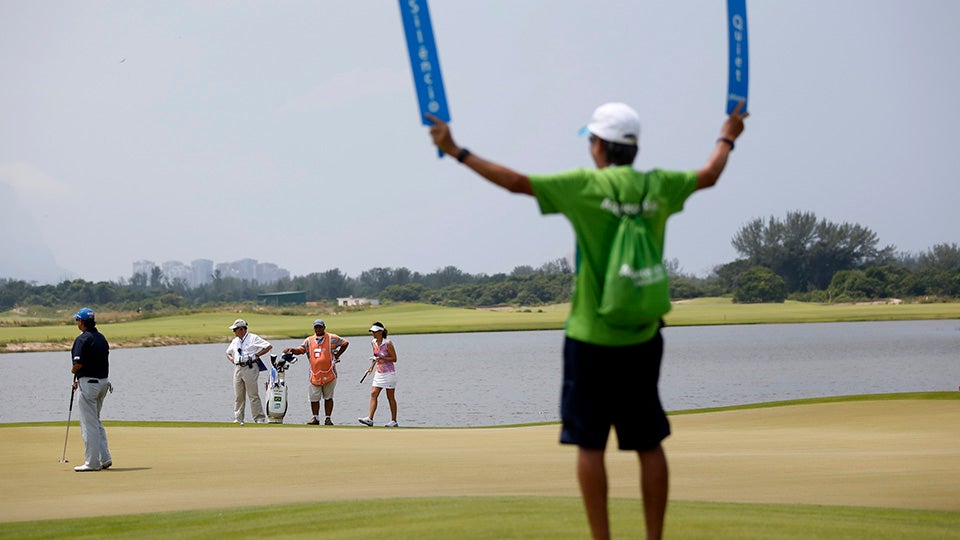 A small mixed field of Brazilian golfers played an 18-hole exhibition at the Olympic Golf Course on Tuesday. It was the first competitive round played on the beleaguered Gil Hanse-design that in August will host golf’s return to the Olympic program after a 112-year absence.

With no purse, nine golfers played only for pride and (gold!) participation medals, which International Golf Federation President Peter Dawson awarded to each of the contestants in a ceremony following the final putt.

Alexandre Rocha and Rodrigo Lee tied for medalist honors among the five men with 3-under 68s, while Miriam Nagl led the four ladies with a 4-under 67. But the leaderboard barely registered as a topic of conversation in the post-tournament press conferences.

Players and organizers alike hailed the event as a major success not only for the Olympics but also for the growth of golf in Brazil, as the course will become one of the country’s first 18-hole public tracks after the Games.

“This is the future for us,” Rocha said. “Our existing courses are old and this is modern golf. We have plenty of land in this country to be able to make more courses like this.”

Carved out of a sandy expanse on the outskirts of previously protected land in the Riserva da Marapendi, environmental lawsuits turned the project into a five-year odyssey that Dawson seemed eager to put behind him.

“It’s been a long haul to get here,” Dawson said. “But at long last we’ve got a terrific golf course that’s going to ensure golf will have a successful turn in the Olympic Games.”

Citing its wide fairways, Dawson compared the Olympic Course to the Old Course at St. Andrews, saying that when the greens firm up and the Brazil’s winter winds begin to blow, the course will be a tough test of links golf.

While Dawson said that “very little needs to be done” to get the course itself ready for the Games, Olympic golf and the Olympic Games still face challenges.

With five months to go until the start of the Games, much of the infrastructure in the Barra di Tijuca neighborhood where many Olympic events will be head is still under construction. Riserva Golfe, the luxury real estate development adjacent to the Olympic Course, is slowly rising right behind the first tee. On Tuesday the clatter of construction was as constant as the heat.

The Olympic Course may be finished, but the surrounding area is still very much under construction. First tee: pic.twitter.com/XXTt4HUbyg

Brazil also has been gripped by economic and political turmoil in recent days. As the country slips further into its worst recession in 25 years, President Dilma Rousseff is facing an impeachment effort, while former president Luiz Inacio Lula da Silva, commonly called “Lula,” has been ensnared in a scandal involving the state-run oil company Petrobras.

Complicating matters further is a growing public health crisis, one that is of particular concern to Olympic golf officials, as the mosquito-borne Zika virus continues to spread throughout the country. IGF Vice President Ty Votaw told GOLF.com last month that organizers were investigating ways to “create movement” in the two large standing water hazards on the course to make them less attractive to mosquitoes.

None of the challenges ahead or behind managed to dampen the enthusiasm on Tuesday. Though closed to the public, the event drew hundreds of observers, from golf powerbrokers to members of the international press to — by special invitation only — the local country club elite. Oh, and Paul McGinley.

Team Europe’s 2014 Ryder Cup-winning captain is the “team leader” of Ireland’s Olympic golf squad, and while he admits his current role is “nowhere near as tactical” as the Ryder Cup captaincy, he still flew in for the event to scout the course for his players.

“This is all new to us,” McGinley said. “So it’s about preparing the players and giving them the information they need to play their best and making it as seamless as possible for them off the course so they can enjoy the fact that we’ve got a place at the top table in sports. This is an exciting adventure. Let’s see where it takes us.” Whether golf becomes a mainstay of the Olympics or just a passing curiosity, Brazil Golf Confederation President Paulo Pacheco hopes that the success of Olympic golf could usher in a new era for the sport in his country.

“This project could change the concept of golf in Brazil,” Pacheco said. “It wasn’t easy, but you had to do something beautiful and big for the Olympic Games. Now we open the door. This is only the first step.”