Norman Xiong was golf’s next superstar. Now he’s focused on a new chapter 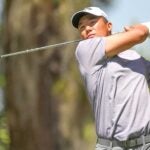 Norman Xiong made his first PGA Tour start in over two years when he teed it up at the 3M Open on Thursday.

BLAINE, Minn. — It’s raining at TPC Twin Cities. It won’t last long, but this, mixed with lightning in the area, is enough for a delay in the first round of the 3M Open. Norman Xiong pulls out his phone. He’s one over through eight, but only because he made a birdie right before the horn blew. Now he needs to reset. “Get my mind in the right place,” he says.

Xiong starts dialing. He keeps their identities secret. “People in my corner,” he says with a smile.

Whoever he called, it worked. After a nearly two-hour delay, Xiong returned to the par-5 18th hole — he started on the back nine — and got up and down for birdie. Then he birdied the 1st hole. Three straight, just like that. He nearly made another birdie on 3, bogeyed the 4th and made pars the rest of the way. It was an even-par 71, which doesn’t crack the top 50 but puts him in position to stick around for the weekend, if he plays well Friday.

“Honestly it was more of just me venting [on the phone], because I wasn’t in a good space mentally,” Xiong said after his round. “Kind of letting that out and being able to share, that really helped me feel better.”

Xiong [pronounced Zhong] qualified for the 3M Open after taking the final of four spots from the Monday qualifier, and Thursday was his first PGA Tour start in more than two years. Once dubbed golf’s next superstar at 19, Xiong is now 22, and he’s still trying to find it — whatever it was that made the game ridiculously easy in college that’s not actually so easy. Not all the time. Not right now. Some young stars storm onto the scene and never look back. Others take more time. More don’t pan out. Xiong, resilient as ever, is still chasing.

His path, he’s going to have a story about it, and I think he’ll figure it out if he’s willing to persevere for the long haul.

He’s playing without any status and trying like hell to get through Monday qualifiers — competing in about 20 PGA Tour/Korn Ferry Tour Mondays in the last two years — but grinding through weekly Mondays isn’t for the faint of heart. Everyone is hungry. Everyone is good. Really good.

But so is Xiong. So good, in fact, he didn’t stay at Oregon long. And why would he? Everything he did proved his game was ready for the next level. Oregon coach Casey Martin recruited him out of Colina Park Golf Course, a San Diego First Tee chapter, a kid with zero instruction but oozing with talent.

“He looks at the ball and whacks it,” Martin recalls. “And it just obeyed. Hard to explain. It was so effortless.”

Results came immediately. Before Collin Morikawa was Collin Morikawa and Viktor Hovland was Viktor Hovland and Matthew Wolff was Matthew Wolff, Xiong was the man to beat. He was the NCAA Freshman of the Year, won six times as a sophomore and took home the Nicklaus (DI men’s golfer of the year) and Haskins (outstanding collegiate golfer) awards. He even starred in a Walker Cup, teaming with Morikawa to win one of their 2017 matches 8 and 7. Eight and seven. “It’s really easy to play with Norman, and when you hit good shots it’s a lot easier,” Morikawa said back then.

At Oregon, Xiong’s strengths were off the tee and on the greens. He drove the ball like no one else. Martin called it freakish. One time the golf team’s statistician approached Martin about an error in their system. Surely someone can’t be hitting 90 percent of their fairways and driving it 30 yards farther than everyone else? This must be a glitch. It wasn’t.

“When you do those things at the level he was, golf is pretty easy,” Martin says. “It was a sight to behold.”

Xiong turned pro in May 2018 at age 19. There was pressure on him to succeed and expectations were high, although some of that was fueled by a quote. In April 2018, Martin told Golfweek that Xiong was the best he’s seen since Tiger Woods, whom Casey was teammates with at Stanford. That quote was gobbled up and aggregated everywhere — on websites, on telecasts, you name it. It snowballed and soon took on a new meaning, different from what was originally published.

“People run with it,” Casey says. “It came out as he’s the next Tiger. That’s not what I said.

“He was either better or more impressive than anybody. It was a fact. It wasn’t really my opinion. You are watching a 19-year-old win six times and obviously destroy these golf courses.”

Upon turning pro, Xiong hired a short-game coach to help fine-tune what he said was the weakest part of his game, inside 100 yards. At The Greenbrier, his first start, he said he felt mature enough and emotionally ready to take the next step. He didn’t think another year in college would have helped him.

“This is kind of where it all begins again,” he said back then. “I’ve definitely played some great golf in college golf and amateur golf, but it’s a different stage. It is still golf, so on the course, hopefully, I can make it the same and play the game that I have.”

But Xiong hit road bumps early. He made six PGA Tour starts in 2017-18 and missed the cut in all six. He earned his Korn Ferry Tour card for 2019 but missed 15 cuts in 21 starts. He also had three PGA Tour starts that year, and his best came in Mississippi, where he shared the 36-hole co-lead at the Sanderson Farms only to shoot 76-69 over the weekend and tie for 26th. His last PGA Tour start, before this week’s 3M Open, was a T68 at the Memorial in June 2019.

A lot has happened since. What, exactly? Well, life is complex. Golf is hard, physically and mentally. Sometimes there are lots of voices and sometimes there are none. Xiong prefers not to go too deep into his learnings over the past two years.

“It’s tough to explain,” he says. “I feel like I could write a book about it. That’s how much I have felt has gone on. Basically just a lot has changed. I have changed. But life goes on.”

Xiong’s story is not unique. He’s just next. Justin Rose was England’s darling after he tied for 4th in the 1998 Open Championship at Royal Birkdale as an amateur. He was only 17, and he turned pro the next day. He now-famously went on to miss 21 straight cuts.

“Deep down, I had the belief I was eventually going to get there,” Rose said at the 2002 Open Championship, four years later, two European Tour titles under his belt. “On the surface, I didn’t know how long it was going to take me. When you’re putting in a lot of hard work and not seeing the results, it gets very frustrating. I think deep down I never doubted the fact that I was going to eventually get where I wanted to be.”

Xiong says his game is in a good spot but he’s trying not to focus on results. He’s set on “playing the game I want to play.” If he does that, the logic says, the results will take care of themselves. So that’s the plan.

“This is obviously a big opportunity for me with the status I have, or the lack of status I have right now,” says Xiong, who plays out of TPC Summerlin in Las Vegas. “Obviously it could change a lot of things in my life. But my game feels good. Honestly the most important thing to me success-wise is just to be able to play my game and be happy out there and feel good, and I think I did that on the back nine out there today. So hopefully I can carry that to tomorrow and see where that goes.”

Casey is quick to remind Xiong could still be a senior in college right now. He enrolled in Oregon early, as a 17 year old, and then left early. At 22, he’s the same age as Wolff, a year younger than Hovland and two years younger than Morikawa.

“He’s just a pup,” Martin says. “He had to come out. I don’t think he made the wrong decision. His path, he’s going to have a story about it, and I think he’ll figure it out if he’s willing to persevere for the long haul.”

Casey says he always cheers up when talking about Xiong, whom he says has a big smile, a big heart and a phenomenal personality. And he’s being tested.

“He’s the best,” Martin says, then repeats it for good measure. “He’s the best. I’m forever linked to him. I love him so much. I’m praying for him. Just his path maybe won’t be as simple as we thought it was, but his talent hasn’t left.”

“I love that guy,” Xiong says of Casey. “We definitely have a great mutual respect, and I think that’s why I had great success in Oregon. He guided me well, but it feels like it’s a new chapter in my life, that I have to kind of go on my own. And I feel like I started it very recently. It feels good, but I have a lot left to go.”