JERSEY CITY, N.J. — Just after 7:30 a.m. on Thursday morning, two men in t-shirts and cargo shorts knelt at the back of the 10th tee, feverishly spreading mulch to replace a series of potted plants beneath a Rolex sign.

Just behind them, Tiger Woods strolled from the adjacent putting green onto the tee, caddie Joe LaCava in tow. Playing partners Scott Piercy and J.T. Poston came after. Three cameramen sidled into position. Four blue-shirted volunteers stood off to the left of the teebox; five others stood to the right. As Woods’ name was announced, a couple of them glanced at each other, then clapped unconvincingly — even if volunteers are supposed to be impartial, it felt like someone should make some noise.

Each player hit the fairway, Piercy then Woods then Poston, and the volunteers half-clapped each time, and then the morning’s featured tee time was off down No. 10, not a ticket-holder in sight.

The empty course was more than morning malaise; a Wednesday evening storm had ripped through the New York City metro area. The wind and rain had caused puddling in some places and causing some damage to “tournament infrastructure and hospitality venues,” according to a PGA Tour release. As a result, the gates didn’t open to fans until 10 a.m.

Crews from nearby golf courses and maintenance staff worked in the wee hours of Thursday morning to get the place in shape. By the time players arrived, the most serious casualty of the storm seemed to be momentum. This is the beginning of the playoffs, after all. It’s among the strongest fields in golf. And yet its headliners — Woods plus Rory McIlroy, Dustin Johnson, Brooks Koepka — all teed off by 8:15 in relative anonymity.

News
Tiger Woods falters on Thursday at Liberty National, but will his season end this week?

Woods appeared to sleep-walk through his first nine, carding three bogeys and a double en route to an opening four-over 75. But Johnson (63) and McIlroy (65) were among those who shredded the course in the early-going, taking advantage of warm, calm, soft conditions (not to mention Troy Merritt’s nine-under 62).

This is hardly the first time that poor weather has affected a golf tournament, of course. But it’s a rare step to keep fans out. In 2011, the Northern Trust (then The Barclays) was shortened to 54 holes and wrapped up by midday Saturday to dodge the wrath of incoming Hurricane Irene — but even then, fans were allowed through the gates.

The most recent example of a fan-free tournament day came on Saturday at the 2012 AT&T National at Congressional Country Club. A Friday night thunderstorm wrought havoc on the property, forcing organizers to work through the night — and ban spectators for the third round. A handful of volunteers and essential grounds crew followed Woods around that day, which he cited as unusual — though playing partner Bo Van Pelt joked that the small gallery felt distinctly familiar.

On Thursday in Jersey City, the same dynamic was at play. Woods is used to large crowds; Piercy and Poston are not. But it must have been strange for them anyway. Bleachers are made to hold people, volunteers are there to control crowds, and concessions are set up to sell to consumers. Without the people, the place took on an eerie quality; the chillest post-apocalyptic site of all time. 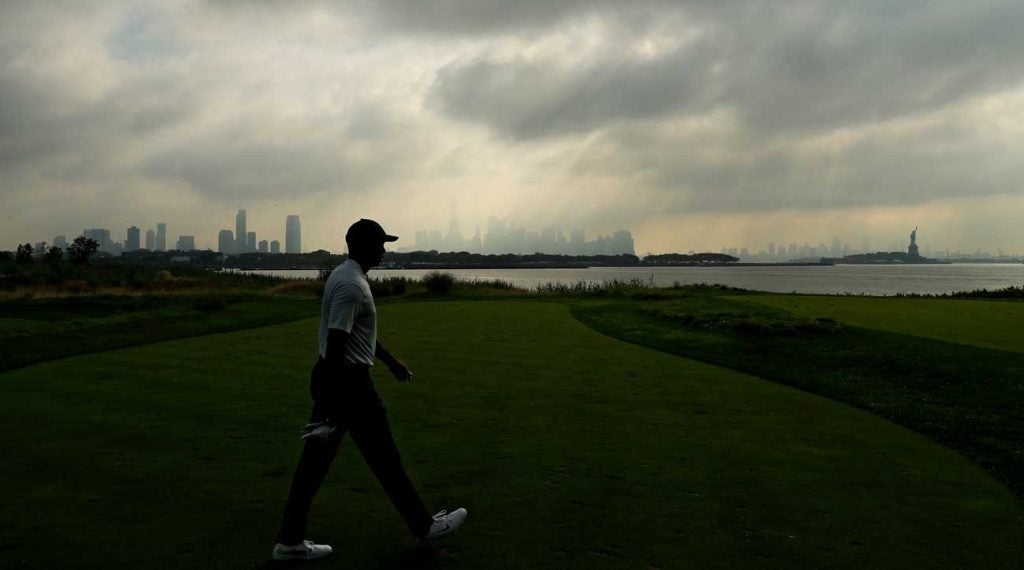 The lack of fans made for an eerie start to Thursday's round — but not for long.
Getty Images

The spectacle brought three thoughts to mind: First, that most golfers, even at this level, play most of their golf relatively alone. A player like Piercy may be on Tour half the year, but how many diehard fans are tracking his progress?

Second, and by contrast, a player like Woods or McIlroy or Koepka hardly ever plays golf alone, especially on Tour, where inquisitive eyes are always watching. The Two Tours. The third thought is a question of identity. Is the Northern Trust put on primarily for the benefit of the players competing? For the fans on site? Or the viewers at home? Put another way: Is this a golf tournament, a local event, or a TV show?

I never arrived at an answer. Half past eight, the spell was broken. Damage repair had gone faster than anticipated; as a result, tournament officials made the call to let in any ticketed fans who happened to show up. A few at first, then more. By the time the featured groups had reached their back nine, they were swarmed with onlookers.

As McIlroy launched driver off No. 6, his 15th hole of the day, one fan’s bellow cut through the morning air. “Get in the hole!”

The tournament was back on.