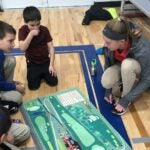 Dave Robinson is a storyteller at heart, which is a strange thing to say about a man in charge of the golf futures of several thousand children.

Robinson, who is the director of the Southeast Michigan TGA, spent more than 30 years in the newspaper industry as a sports editor and deputy managing editor of the Detroit Free Press. He held a significant role for one of the largest publishers in the country, even coordinating Olympic coverage among a series of major newspapers.

In 2007, he stunned his coworkers and accepted a buyout from his publisher, effectively quitting the only job he’d ever known.

“They announced this buyout program to figure out how we were going to reduce staff,” he told GOLF.com “Instead, I’m sitting in this meeting, and they’re saying, you know, a year of pay and a year of health care. My daughter was a junior in college, and my son had already graduated. And I’m thinking, ‘God, my costs are going way down.'”

The buyout was a sign: it was time for a change. Still, the job market was in a free fall, and Robinson didn’t have anything that remotely resembled his next move.

Eventually, he was a finalist for a journalism professorship at Arizona State’s Walter Cronkite School of Journalism. But as he pictured himself in the job, he disliked what he saw.

“It was one of these things where it’s like 70 applicants, and I was one of five finalists, and I go there for the interview,” Robinson said. “I realized, wait a minute, this is exactly the kind of bureaucracy that I was just in.”

A different path was calling. A path Robinson started down in the early 60s when he caddied for $3.50 a bag at St. Louis Country Club. A path back to golf.

A few months later, in the middle of 2008, Robinson was the proud owner of his first Teach, Grow, Achieve (TGA) Franchise in southern Michigan. Today, he’s responsible for all TGA camps in Oakland, Wayne and Macomb counties, which make up the overwhelming majority of the Detroit Metro area.

In a good year, more than 4,000 students (many of them young women) will come through the doors of Robinson’s TGA camps. Each camp is designed to provide an introduction to the sport. Counselors provide schoolchildren with pointers on swing development, golf etiquette, short game fundamentals and in the process, Robinson hopes, will instill a passion for the game.

“It was just such a welcoming setting,” said Shelleyann Keelean, whose eight-year-old son George is in his third year at TGA. “My son was very nervous, young, and he was pretty quiet. With other sports, I feel like a lot of times when they go to a tryout or to a camp, they’re kind of comparing themselves to each other. Dave made it where it was comfortable for all of them.”

For Keelean and dozens of other parents, TGA has formed a unique role in their children’s lives outside the parameters of the game.

“I would definitely say to them that it’s more than a sport,” she said. “As an [elementary school] principle, the kids that have stuck with it, I feel like a different type of confidence in them, and just how they handle themselves during a competition or during a stressful situation.”

And development on the course comes even quicker. In the dozen years since Robinson first became involved with TGA, his camps are responsible for developing hundreds of single-digit handicap golfers. One area of particular success has come in the women’s game, where Robinson’s camps sent an astonishing 26 players to the Michigan girls state championships last fall, including the tournament’s eventual third-place finisher, Lauren Timpf.

Timpf is one of TGA’s true shining stars, earning Detroit metro area player of the year honors in December. Last summer, she competed against women as a teenager in the Michigan Women’s Amateur and reached the tournament’s quarterfinals. These days, she’s down to a 0.3-handicap … and she still has four years of high school to whittle that number down further.

But it was her maturity, not her exceptional ability, that made her a natural fit to teach the game. She’s the youngest of Robinson’s counselors — 73 of whom are former TGA students themselves.

“I always love teaching putting, because short game is probably the most important thing in golf,” she said. “The rules and etiquette station is great too, because kids can learn a lot from that. It really helps their golf IQ.”

“I remember, probably four or five years ago, I was playing in a tournament, and there was no rules official close to our group,” Timpf said. “This one girl asked me how she should take a drop out of a penalty zone, and I knew that from TGA. I thought to myself, ‘Wow, that’s really cool.'”

For Robinson, the former newspaper editor, his TGA story isn’t solely one of a career change.

“Success is basically measured in smiles,” he said. “Kids who are having a great time, and smiling and enjoying the game, and enjoying meeting new friends. I get a great deal of satisfaction from working with coaches. They’re really maturing, and they’re learning, they’re getting some really good life experiences, having fun and giving back.”