Dustin Johnson’s reign atop the golf world is over — at least for now.

Justin Thomas finished T11 at the Players Championship on Sunday. That result, coupled with Johnson’s T17 finish, was enough for Thomas to leapfrog Johnson as the new No. 1 player in the world.

Thomas, 25, becomes the fourth-youngest player to hold the top spot in the Official World Golf Ranking and the 21st overall since the ranking began in 1986.

A five-win 2017 helped Thomas gain major ground in the OWGR; he was ranked 22nd at the end of 2016 but jumped to 3rd at the end of 2017. He dropped a spot back at the beginning of 2018, but a victory at The Honda Classic followed by a runner-up finish at the WGC-Mexico Championship moved him to second. He had a couple of opportunities to pass Johnson recently but wasn’t able to get it done. Two months ago at the WGC-Dell Technologies Match Play, where Thomas came a win short of grabbing the No. 1 ranking, he talked about how much it meant to him.

NEWSFLASH: @JustinThomas34 becomes the 21st player to reach No.1 in the #OWGR! At 25 y.o. he is also the 4th youngest to do so, after Woods, Spieth and McIlroy.

Great run of 64 consecutive weeks at no.1 for @DJohnsonPGA (that’s the 5th longest spell at #1).

“I haven’t had such a hard time not thinking about something so much,” he said. “And that really sucked. I couldn’t stop thinking about it, to be perfectly honest. And I think you’re constantly getting questions about it with the media, but I need to be mentally stronger than that, and understand that it’s just a match.” 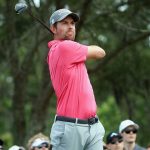