Last month my brother and I were hacking our way around a scenic New York City-area course when it occurred to me that we had committed a fatal error: we weren’t playing for anything. No skins. No Nassau. No junk. Nadda. With four holes left, I suggested we liven things up by closing out the round with a simple format: 15th hole would be worth $5, 16 would be worth $10, 17 would be $15, with the home hole winner banking a Jackson. Carry-overs? Of course! High-stakes golf, baby!

I won the 15th with a cool double-bogey (it was that kind of day). The next three holes were a blur, but I can tell you my wallet is still smarting from the beating it took.

But back to the format. We loved it, because the pressure intensified with each hole. Which got me thinking about how best to apply this financial structure to 18 holes. Playing the 1st hole for five bucks and increasing in $5 increments would be silly — a bad round could cost you the better part of a paycheck.

A more affordable (and simpler) application: value each hole for its number on the scorecard. Ergo, No. 1 would be worth a dollar, the 2nd would be worth $2, the 3rd would be $3 and so on. The beauty of this format is not only its simplicity but also the fact that you can play like a dog for long stretches and still come out on top. Say, for example, your opponent shut you out in the first 12 holes. Yes, you’d be $78 in the hole, but chin up, pards! The last six holes are worth a total of $93. So, if you dug deep and rediscovered your game, you could still win back all your losses and then some.

I’ve christened the game Vise, because each passing hole has the potential to squeeze an increasingly larger number of dollars from your pocket. The most you could lose in an 18-hole match is $171, which, yes, would sting in a big way, but that outcome is highly unlikely. 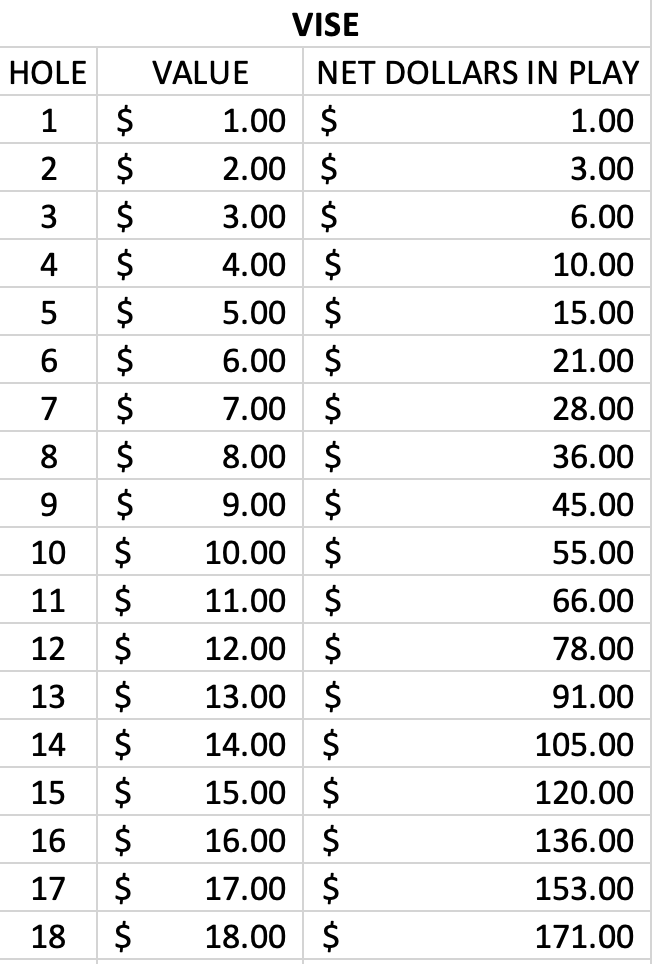 In Vise, as the hole numbers increase, so too do the dollar amounts you play for.

I’ve twice employed the format since that outing with my brother and can report that it adds some serious sizzle to the proceedings. (On one of those occasions, I largely stunk up the course, won just three holes and yet still finished in the black.) The small stakes on the first few holes allow you to ease into the match, while the high stakes later in the round put a premium on the last few holes, which is what you want in a golf match. 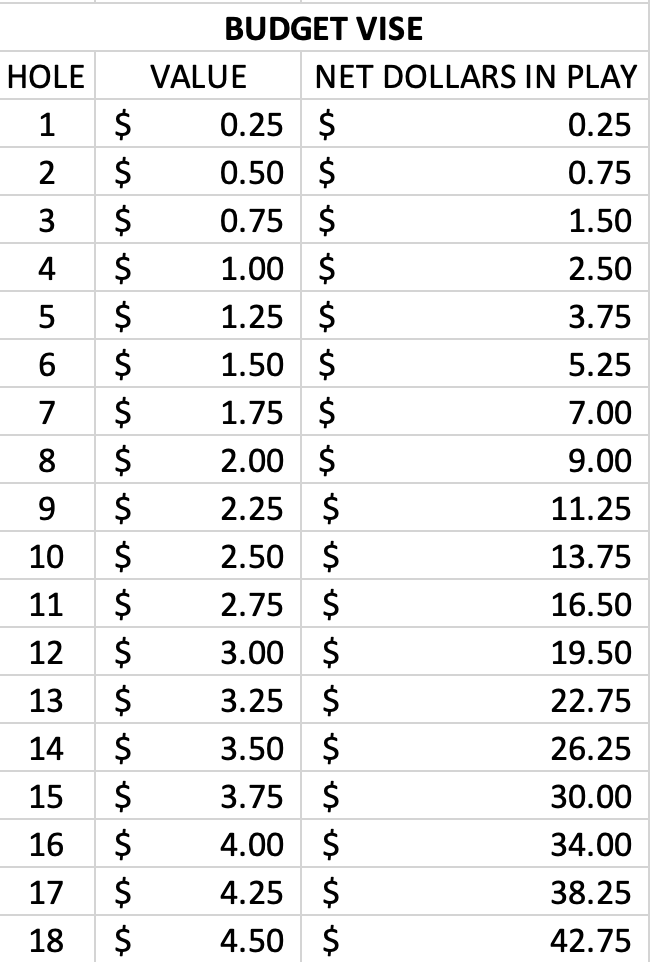 If Vise is out of your comfort zone, try Budget Vise.

Maybe this game exists, but none of my golf buddies or colleagues had heard of the format, so for now at least, I’m claiming Vise as my own. You’re more than welcome to co-opt it.