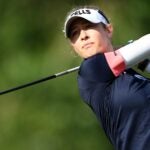 Nelly Korda in the first round of the Amundi Evian Championship on Thursday.

Nelly Korda is the proud new owner of a World No. 1 ranking. And a gamer laptop.

Each is useful, in its own way. In recent weeks, the newly minted major champion has tasted the fame and fortune that comes from ascending to the top of the women’s golf world.

She’s been on magazine covers, news tickers and every social media feed. In short: Nelly — alongside her 13th-ranked older sister Jessica — has gone mainstream.

If she loves the newfound fame and fortune, she plays it pretty cool. Before this week’s Evian Championship, she called the attention “super special” and a “huge honor,” but largely demurred on the topic. No newly famous person likes to talk about being newly famous.

Famous or not, there are perks to her job, like this week’s mandatory business trip to scenic Evian-les-Baines, France.

But there are challenges, too, that go along with being any level of professional golfer but most of all with being world No. 1. When Korda shot three-over 74 on Thursday, for instance, that was a story. When you’re No. 1, everything’s a story. So how to deal with it?

“Well, I bought a gaming laptop,” she said with a laugh. “So I am gaming a little, just to try and keep my mind off of things. You kinda need a way to escape a little sometimes, so I was like, ‘Hmm, may as well try it out.’ Other than that, just rest and take it easy.”

So what games is Korda getting into? Mostly it’s Call of Duty and Modern Warfare. But she’s tempted to go with something even more relaxing, too. “When I was a kid I really liked the card games, so I may download one of those,” she said. “Complete nerd coming out of me right now.”

There’s nothing new about pro golfers gaming on the road; Tiger Woods himself has named Call of Duty as his game of choice, while Bryson DeChambeau Twitch-streamed his Fortnite sessions for a while. For Korda, it’s an easy way to stay fresh and keep her mind off golf.

“A lot of people put a lot of pressure on these weeks and they tire themselves out so much, especially mentally, and I think if you’re tired mentally, which I’ve learned in the past, you’re just dead, drained.”

Largely, though, Korda stays to the parts of her world that she knows and loves: Her family and her sports. She gushed about Jessica making the Olympics, knowing the two of them would get to compete together. During a recent off-week she was thrilled to spend some time with Sebastian, her pro tennis player brother, just catching up. From the outside, it’s obviously exceptional that the three siblings are among the best in the world at what they do. But in their family, that’s just life.

In other words, don’t expect the No. 1 thing to go to her head. Winning, like gaming, is awfully addicting. And don’t expect all the interview requests to reach her, either. Asked if she’s faced increased attention in recent months, she deferred again.

“I don’t know, ask my agent that,” she said. She’ll focus on the positives. “Usually my dad and my agent handle that. But yeah, it’s been exciting. It’s been cool. It’s been really special and sometimes I’m just like, ‘Pinch me. Is this even real?'”

Some days, there are 74s. That’s golf. But there’s a world beyond, too, filled with opportunities that won’t soon go away. The Olympics come next. A supportive family is just a FaceTime away. Life is good.

And Call of Duty awaits.