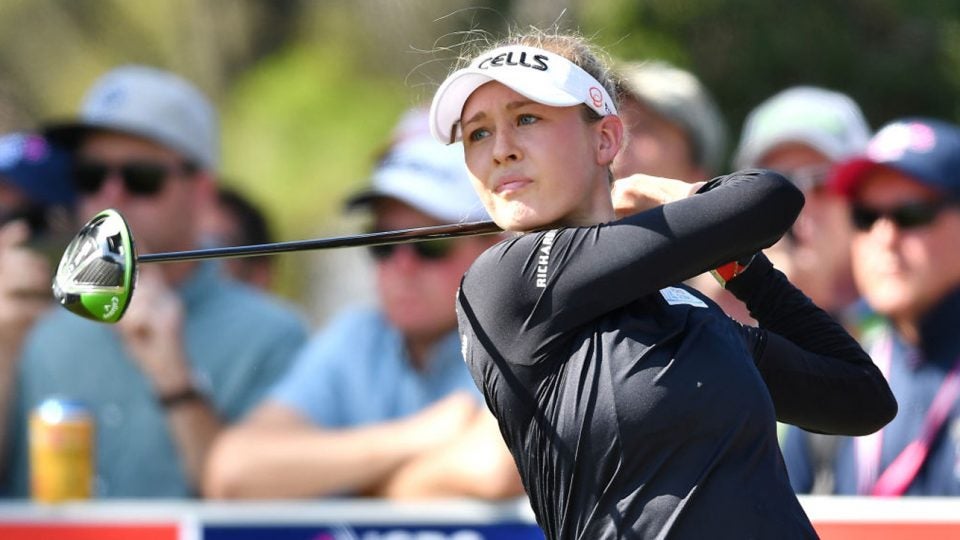 Nelly Korda captured the ISPS Handa Women’s Australian Open title on Sunday for her second career LPGA Tour win in a span of four months. She also became the fourth member of her family to win a sporting event Down Under.

“I’m just happy to finally be a part of the club,” Korda said. “There’s maybe something in the air here. We love coming down under and we really enjoy our time here.”

“I just got off the phone with my dad and he’s like ‘well, congratulations, you’re part of the Korda Slam now’,” Korda continued.

Korda entered Sunday’s final round at The Grange Golf Club leading by three strokes. After a pair of pars to open up the day, Korda birdied the par-4 third hole. Following three straight pars, Korda would land back-to-back birdies at the par-4 seventh and par-3 eighth holes. However, her front nine would end on a sour note with a bogey on the par-4 ninth hole.

But Korda got back to playing well after the turn as she stretched her lead to 5-under after three consecutive birdies at the par-5 10th, par-4 11th, and par-3 12th hole. She would par the next two holes before settling for bogey at the par-4 15th tee. Nevertheless, a seventh and final birdie of the day at the par-4 17th hole was enough to carry the 20-year-old Korda to  a two-shot victory.

Korda finished with a 5-under 67 on the day and at 17-under 271 for the entire tournament to capture her second LPGA Tour win. Her first came this past October at the Swinging Skirts LPGA Taiwan Championship.

News
The Sisters Korda: Jessica and Nelly discuss their relationship, and what it’s like competing in a family full of athletes

But Sunday’s win obviously has a lot more meaning to Korda given her family’s athletic success in Australia.

“When I was left out (of winning in Australia) they didn’t try to rub it in too much,” Nelly Korda said. “Now that we all have a win down here, it’s going to be really special … obviously there was pressure but I think I finally carved my own way.”