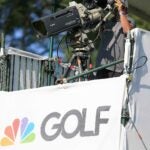 The NBC Golf team, stewarded by lead producer Tommy Roy, prepares for a unique test at the U.S. Women's Open.

Tommy Roy, like many other great television producers, is a man of considerable mettle. In the last year, NBC’s 29-time Emmy Award-winning lead golf producer has deftly performed his high-wire television act despite cancellations, pandemic restrictions and a cloud of thick, white fog at the U.S. Amateur.

Roy, like many other great television producers, is also a man of considerable metal. He speaks in brass tacks, rules with an iron fist and yes, even has a bladder of steel.

“The biggest challenge is you can’t go to the bathroom,” Roy says with a laugh. “You gotta stay there. There’s no commercial break you can get up and leave. So you’ve got to limit your liquid intake before you go on the air.”

Roy is speaking of this week’s U.S. Women’s Open, where he is preparing to air large blocks of commercial-free golf from Champions Golf Club, in Houston.

It’s the third time in as many years the Women’s Open will adopt a quasi-commercial-free format, but the first with Roy at the helm. NBC snatched up the USGA’s broadcast rights in a shrewd deal with Fox in June, and the advertising structure came with it. That’s great news for golf fans, for the USGA and for Rolex (the sponsor that financed the arrangement).

It’s not great news for Roy and the rest of the production team, whose precious few opportunities for a bathroom break usually rely upon commercial stoppages.

“We’re used to it,” he said. “When I’m in a typical stroke-play event and I need to use the bathroom and we hit a commercial, I can. That’s the one thing that’s different about golf than producing a football, baseball, basketball game — they stop playing when you go to commercial. In golf, they never stop playing.”

The commercial conundrum is only one of many production challenges facing Roy and his team in Houston. The opening rounds of the tournament will be contested across two separate courses at Champions — Cypress Creek and Jackrabbit — in order to ensure the completion of play before sundown each day.

While this wrinkle introduces an intriguing strategic element to the tournament, it also means twice the work for NBC’s on-air talent.

“I’ll be in a day early, or actually almost two days earlier, than what I would normally be on property just to get a feel for the two different golf courses, get a feel from players how they’re preparing differently for the week,” said lead NBC analyst Paige Mackenzie. “It’ll be interesting from the broadcast side to see how we interplay the highlights from the one course as we’re broadcasting, you know, two at the same time.”

On the production side, Roy and his team have designated three LiveU units on the Jackrabbit course for Thursday and Friday. The trio of cameras, which operate over cell-phone signal rather than radio frequency, will trail key groups on the additional course over the opening two days. The crew will also have access to its full arsenal of 30 or so cameras on the Cypress Creek course, which will host the final 36 holes.

“The biggest thing is that golf is very expensive to do,” Roy said. “You have to journalistically be able to cover what’s going on [at] that other golf course to keep people up to date on the leaderboard, but you have to do it in a fiscally responsible way.”

NBC added an additional director, a graphics operator and roughly a dozen more technicians to handle the extra action. But even with reinforcements, the Jackrabbit course provides its own set of challenges.

With only three cameras on the second course, who should NBC follow during its 12.5 combined hours of coverage on Thursday and Friday? It’s a question without an obvious answer.

This won’t be NBC’s first event with 36 simultaneous holes of action. At the old Bob Hope Desert Classic (now called the American Express), Roy and his crew were sometimes tasked with covering five rounds across four different courses.

“Typically, a wave of players on the golf course is up to 70 players at a time,” Roy said. “Well, now we’re doubling that. So we’re tracking that many more people at the same time. That’s obviously way more complicated, but it’s doable.”

Still, twice the action and a fraction of the commercial time isn’t enough to buy a different outlook for the week at the U.S. Women’s Open. In this bizarre year and under the most unusual circumstances, the expectation remains the same.

“[We’re] trying to show as many players as we can over the course of the two days, getting in as many golf shots as we can, and telling the story,” he said. “Hopefully there’s some great excitement and shotmaking as well.”

Of that, there’s no doubt. Even in normal times, live television is a high-wire act without a net, requiring production teams to effectively manage those things that are within their control, along with those that are not.

“A truly successful broadcast means no bad weather,” he laughed. “So, we’ll see.”