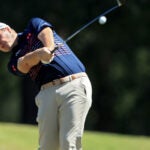 MJ Daffue could change his career this weekend at the Sanderson Farms.

Could this be the week that changes MJ Daffue’s life? It just might be.

The 31-year-old South African is an absolute grinder of a journeyman at this point in his career, but he’s playing some of the best golf of his life. And through 36 holes, he’s just three back of the Sanderson Farms leader Keegan Bradley.

Daffue really is the most unlikely contender at the moment in Mississippi. He Monday-qualified into the event by lasting through a 7-hole playoff Monday afternoon. Then he went out and carved a 65 out of the turf on Thursday and backed it up with five more birdies and a 69 Friday.

If his name isn’t familiar, you might need to pay a little closer attention to the pro circuit. Daffue was in the heat of contention at the Workday Charity Open. A Sunday 73 dropped him off the leaderboard, but still led to a very respectable T22 finish.

He made the cut at the Puerto Rico Open before the pandemic struck America, and most recently did so again at the Safeway Open. That finish, and the Workday finish were both during weeks in which he Monday qualified, which has become a bit of a theme. Daffue has now qualified in nine of his last 14 attempts to reach PGA Tour and Korn Ferry Tour events. That’s an unparalleled success rate.

As the PGA Tour wrote earlier this week, he’d like to not have to Monday qualify into events much longer. A little more job security would be nice. But with no graduates from the Korn Ferry Tour earning PGA Tour cards this year, he’s basically looking at his best chance: play well, and do it this week.