Monday Marquee: It’s early in the week, but Tiger, Freddie, and JT are already sending roars around Augusta

AUGUSTA, Ga. — It was just shy of 3 p.m. on Monday afternoon by the time the day’s featured grouping headed to the 1st tee. But fans that were considering heading for the exits, worn out after hours in the sun, reconsidered as Fred Couples, Justin Thomas, and Tiger Woods headed from the range to the course.

For a few years now, Augusta National itself has been the main attraction at the Masters, and it was again for much of the day Monday. Fans milled about, blissfully wandering the mostly-empty property all morning, sort of like a national park but with more pastel clothes and craft beer.

But Tiger Woods overpowers the wattage of even the brightest golf course, and ageless fan favorite Fred Couples and recent fan frenemy Justin Thomas joined him for an afternoon nine three days before the year’s first major.

The first roar of the day was also its loudest; Woods launched his approach shot over the back of the par-5 2nd hole before hitting an oh-so-delicate chip that trickled back down the slope before falling in the front edge of the cup, sending the assembled masses into a frenzy.

“Oh,” one fan said by the clubhouse, three fairways over. “That’s where Tiger’s group is.” 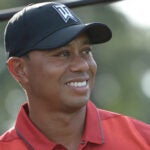 You may also like WATCH: The hype continues! Tiger chips in for eagle on Masters Monday, and the crowd goes crazy

The pairing was an easygoing one — and matching! Thomas wore a pale pink shirt, Couples had a salmon number, and Woods went with hot pink, the three of them averaging out to some sort of azalea homage. Given the Masters’s preference for keeping everyone outside the ropes, the players had no members of their extensive teams in tow, so the three and their caddies spent much of the round in each other’s company, chatting and laughing.

The word spread quickly across the property; by the time their group reached the 5th hole fans were lined up six deep, hundreds of yards down the fairway, hoping to catch a glimpse. Others, nursing beers as they built towers of Augusta-branded empties (who could throw one of those away?!) settled on the hill by the par-3 6th hole to wait for greatness to come to them.

The growing group was on hand to witness perhaps the day’s most impressive shot, in easy view over at the 16th hole: after Tommy Fleetwood and Francesco Molinari had failed to skip their balls off the surface of the water, Fleetwood’s caddie Ian Finnis grabbed one of Fleetwood’s clubs and a ball to show up his boss. Sure enough, Finnis hit a perfect four-skipper that hopped up on the bank and rolled to four feet beyond the hole. At the crowd’s urging, he finished off the birdie putt for an impressive two and took a bow to raucous applause.

“Wait ’til Tiger gets to 16, though,” one fan said. “He’ll just walk across the freakin’ water instead and then put his ball next to the hole when he gets there. THAT I’ll be really impressed with.”

Right on cue, Woods’s group reached the 6th tee. Woods’s iron shot drew in to the back left pin location and stayed pin high, settling some six feet from the flag. He made the putt and looked at the crowd sheepishly as they roared in approval, as if to remind them: this is only Monday. Nobody is keeping score.

After the round, Couples was quick to joke with reporters. “So are you guys going to ask about my round, or just about Tiger? Well, I hit a good drive on 1…” he laughed, then paused. “No, they’re both playing good, they’re just fun to watch. Tiger is hitting it a mile, and very straight, and I think he’s going to be a factor this week.” 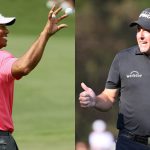 You may also like How’s that for a Masters pairing? Tiger Woods, Phil Mickelson to play practice round together at Augusta

Couples himself, battling a bad back, was encouraged with his recovery.

“I did okay today. I tried to hit a couple harder than I should have, but I did okay.” He seemed to have enjoyed the energy in the crowd, too. “The atmosphere was fun, and I planned it that way,” Couples said. “Tiger’s one of my best friends. I don’t see him much, but I just love the guy.”

Couples also dropped this bombshell: tomorrow, he’ll tee it up with Woods again — and they’ll be joined by Phil Mickelson (and Thomas Pieters). No doubt some fans on property will have some interest in following that foursome.

One couple headed for the exits as Woods headed into the clubhouse Monday evening, sunburned and foot-weary.

“Okay, I got my Tiger fix,” one said with a satisfied sigh. “Now can we find some water and aloe?”