Monday maestro: This pro has open-qualified into a ridiculous number of PGA Tour events this season

The least complicated but perhaps most difficult way to consistently get into PGA Tour events is through Monday qualifiers. Simple because anyone can enter. Difficult because only four spots are available for a field of hundreds of very capable aspiring pros.

This season, T.J. Vogel is defying those odds in a big way. The 27-year-old has bounced around various secondary tours over the years, playing stints on the Web.com tour, PGA Tour Canada and PGA Tour Latinoamerica. Oh, and he played in the 2013 Masters after winning the now-defunct U.S. Publinks. In 2017, Vogel was the only player to make all 12 cuts on the PGA Tour Canada and went on to finished 10th on the money list, good enough to qualify him for the final stage of Web.com tour qualifying school.

At Q-school, however, he managed just a 113th-place finish. Left without much Web.com tour status, Vogel decided to hit the Monday Qualifier circuit full time. In Nov. 2017, he’d qualified for the RSM Classic with a 64. He followed that up in the new year with a 64 to get into the Honda Classic and a 63 the very next week to earn a start at the Valspar Championship. His 65 a few weeks later was good enough to get him into the Wells Fargo Championship, too. Just yesterday, Vogel shot 66 at Gentle Creek Country Club in Prosper, Tex., earning a spot in this week’s AT&T Byron Nelson field.

For some context on just how unlikely this run is, consider that in 2017 no player made it into more than three events; Vogel has already notched five (in ten tries) and it’s only May. Of course, getting into a PGA Tour event is just the start. After missing the cut in his first two events, Vogel has had some success his last two times out: He finished T16 at the Valspar and made another cut at the Wells Fargo, finishing T59. In the process he has earned $94,159, and good thing — playing the Monday qualifier circuit is expensive. 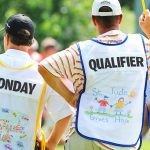 You may also like Big dreams, harsh realities: Here’s how Monday qualifiers fared on Tour in 2017

Other than more cash, what Vogel is playing for this week is status. A top 10 would earn him another start at Colonial the following week. And as a non-PGA Tour member, Vogel could earn his card for the following year earns enough FedEx Cup points to finish the equivalent of 125th by the end of the season. Finishing in the top 200 would guarantee him a trip back to Q-school finals. Vogel earned 42 points at Valspar and five more at Wells Fargo, but he’ll need more: in 2017, finishing 125th required 365 FedEx Cup points, while 82 points was good enough for top 200.

Vogel told MondayQ.com, which tracks qualifier results, that the key to his success is simple: stay aggressive. “The number one mistake I used to make in Monday Qs was getting ahead of myself when I got off to a good start,” he said. “Now I’m telling myself I want more. If I’m at five [under], I want six. If I’m at six, I want seven etc.. no complacency and no limit.” If you need someone to root for on Tour this week, Vogel could be your guy. “Instead of putting the PGA Tour and players on a pedestal, I began to believe I am just as good and can compete with these guys.”