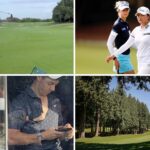 On this fine November week there's plenty of golf intrigue to be thankful for.

Welcome to the Monday Finish, where we’re “making progress” too. Let’s get to it!

It’s winter in Seattle. The calendar won’t confirm it — we still have a month of fall, allegedly — but the weather has settled into a very specific stasis: Never below 38 degrees nor higher than 52 degrees, with a decent chance of gloom but a glimmer of hope for some sunshine, too.

I played plenty of end-of-season high school and college golf tournaments in Massachusetts in similar weather, but there was basically no such thing as winter golf. Once the cold came, there were only a few weeks before snow blanketed the course, ice followed and the season was indisputably over — often without warning. (That’s why the next season would start on the first tee in the spring, zipping open my bag in fear of finding a moldy PB&J.)

But in Seattle this weather just kinda stays. It hovers. I’ll play golf this winter, and my hands will be cold, and the fairways will be soggy, and the ball won’t go very far. But I had the good fortune to play twice this past week at two fine establishments in greater Seattle and I was reminded of the joys of winter golf, so here are a few:

The joy of low expectations.

The freedom of playing outside handicap-posting season.

The flexibility of rolling the ball over.

The feeling you get exactly 40 percent through a cold beer in a warm clubhouse after walking 18 in the elements.

The sense that you’re stealing one from the bad-weather season. The joy in cheating winter.

Tiger Woods (and his fans), but we’ll get to that.

Collin Morikawa posted the first big W of the weekend when he closed like a racehorse at the DP World Tour Championship with five birdies in his final seven holes to shoot 66, win by three and become the first American to win the Race to Dubai as a result.

He was also uncharacteristically emotional after his win, thinking about his late grandfather:

Beyond his laser-like irons, the most striking thing about Morikawa’s game is that he’s a statistically mediocre putter, but when he’s in contention it suddenly looks like there’s a magnet in the hole. Perhaps that’s just the logical effect of his game, given his ballstriking is so steady that whenever he putts well, he’ll be in contention. Either way, he’s suddenly just a win from World No. 1.

Jin Young Ko is World No. 1 after she saw Morikawa’s double-win and raised him to a triple-win. Her Sunday 63 earned her a one-shot victory at the CME Group Tour Championship, the Race to the CME Globe and Rolex Player of the Year. That 63 also matched the number of consecutive greens she hit to finish the week, which isn’t something I feel like I should be able to type in lowercase, so let’s try this:

JIN YOUNG KO HIT 63 GREENS IN A ROW (!!!) TO END THE TOURNAMENT. SHE DIDN’T MISS A GREEN FROM MID-ROUND THURSDAY ALL THE WAY THROUGH SUNDAY. SHE STILL HASN’T MISSED ONE!

Finally there was Talor Gooch, claiming his maiden PGA Tour victory at the RSM Classic. Gooch’s final-round 64 arguably earned him the title of Fall Season MVP, as he logged his third top-five finish, surged into the FedEx Cup lead and punched his ticket to the Masters. How is he doing it? Gooch isn’t a great driver of the ball but he’s very good at everything else; on the season he ranks fifth in strokes gained approach, 13th in strokes gained around the greens and a respectable 67th in strokes gained putting. The fall season was made for folks like Gooch to take their next career steps.

Moral victories all around.

In Dubai, Morikawa’s three-shot margin came over co-runners-up Alexander Bjork and Matthew Fitzpatrick. In the moment, it may have seemed like a frustrating end to the season for Fitzpatrick, who made bogeys at 16 and 17 to surrender his lead. But big-picture, he now has a T2 to accompany his win at the Andalucia Masters and make for a successful post-Ryder Cup response.

On the LPGA, Nasa Hataoka couldn’t match Ko’s 63 but came darn close, making birdie at three of the last four holes to post 64 and finish one shot back. That was a big-time difference in payday — first place earned $1.5 million while second received $480,000 — but it was a tremendous finish to the season for Hataoka. Now she has her gaze firmly set on a major championship next season.

“Not many players are here on the tour from Japan, but I think the Masters win, Hideki’s win, was something very big for us,” said Hataoka, who is from Japan. “He lives very close to where I live in Orlando so we practice a lot, we practice together. So it definitely means something special for me. I would liked to something similar to that.”

And while Gooch held a solid lead for much of the day in Sea Island, Mackenzie Hughes led the chase pack with a final-round 62 to finish solo second, his best finish on Tour since he finished second at the 2020 Honda Classic. Sebastian Munoz was a shot further back in third, and Tyler McCumber had a putt for 59 on the 18th green and got it down in two for a final-round 60 and a share of fourth place.

Here’s that video again, the three-seconder that turned the sports world back into Tiger optimists on Sunday:

Mostly it’s a reminder to make some progress of your own. Woods is many things but right now, on that range, he’s an inspiration. The most important part of his comeback has already happened.

I’m intrigued what the mood is like at Nike Golf HQ after the swoosh got extra brand exposure on Sunday thanks to Rory McIlroy, whose post-round frustration turned into a wardrobe malfunction in Dubai.

Let’s review the sources of frustration, shall we? McIlroy got to the 15th hole on Sunday with the DP World Tour Championship lead. He smoked a tee shot down the fairway, leaving just a pitch shot left on the short par-4. Then this happened:

Yikes. That’s how a birdie becomes a bogey.

In summation, McIlroy basically went on a pub crawl of all of golf’s deepest frustrations — bad break, three-putt, bad drive, water-ball — and responded with a Hulkish shirt-tear. The moment was a reminder that as much as McIlroy is thoughtful, self-aware, reflective and more, he’s also an emotional golfer with high expectations and a tendency to occasionally boil over. There’s a temptation to read more into the torn shirt. Was it emblematic of McIlroy’s Sunday frustrations of recent years? Did that fact that golf’s new golden man, 24-year-old Collin Morikawa, was the one zipping past him on the leaderboard make it worse?

Maybe. But I think it’s just as likely that competitive golf sometimes makes you want to break things, or hit things, or rip things. McIlroy is not immune from temptation. Back to Nike, then: Maybe all brand awareness is good?

I had the good fortune of playing Sahalee Country Club over the weekend in the company of my college golf coach Josh Hillman, his buddy TJ and our host Jeff, a friend from Seattle. Sahalee hosted the 1998 PGA Championship, the 2016 KPMG Women’s PGA and has regularly showcased some of the world’s best amateurs in the the Sahalee Players Championship.

It was my first time on property and even walking up to the driving range, I understood the allure — this is epic Pacific Northwest golf. The trees are massive. They’re majestic. They frame every hole. If you confront them with a wayward tee shot, they’ll batter your ball like the Whomping Willow. The light filters through the trees at different angles. They’re dense enough to look like a wall but open enough that you can punch out — or, for more fun, pick a tiny, inadvisable window on an aggressive line and go for glory. The greens are fascinating but fair and I’m excited at the prospect of seeing the place during a firmer, faster season.

The fact that Sahalee and Chambers Bay are just an hour from each other is a thrilling reminder that golf should reflect its surrounding environment. Because we live on a planet with a stunning array of environments, the options for awesome golf courses should reflect that variety. In the Pacific Northwest, that means a trek into the giant woods. Just try to miss the tree trunks. Those hit back.

Only seven million views on this thing so far? Seems low…

Here’s hoping this week’s edition of The Match between Brooks Koepka and Bryson DeChambeau will be a little spicy in some sort of authentic way. Obviously when you’re talking about a made-for-TV golf match in Las Vegas, “authentic” isn’t one of the first 450 words that comes to mind. But the spice? We can hope that’s real. That’s the whole point, after all.