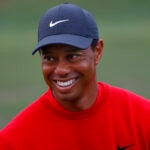 Check in every week for the unfiltered opinions of our writers and editors as they break down the hottest topics in the sport, and join the conversation by tweeting us @golf_com. This week, we discuss Tiger Woods’ swing video, the end of professional golf’s fall seasons and what golfy things we’re thankful for.

1. Tiger Woods set social media ablaze when he posted a video of himself hitting an iron on a driving range, suggesting his recovery is further along than some had believed. What was your reaction to Woods’ video drop?

Sean Zak, senior editor (@sean_zak): My reaction was: “Holy s—!” Truly impressed that he’s hitting full swing shots and taking turf while he does. And perhaps more impressed that his team and his cadre of Jupiter, Fla. buddies were able to keep this largely under wraps this fall.

Dylan Dethier, senior writer (@dylan_dethier): I was so inspired by the moment that I wrote an article about the minutiae of the three-second clip. But I had a similar reaction to Sean. I’d heard whispers of Woods working on short game stuff but had no idea he was this far along. Thinking rationally? It’s awesome to see Woods healthy and in his element. Thinking emotionally? I’m doing mental calculations about recovery times and major championship schedules.

Michael Bamberger, senior writer: As Sandy Tatum once said of Tom Watson’s move, “He has a swing that will not quit.” Just replace one TW with another and the sentence holds. Even without anything like his normal speed, there’s a majesty to Woods’s swing. I think you’d say that even if he didn’t have 15 Grand Slam titles attached to his name. But he does. As Jack Nicklaus says, “Never bet against Tiger Woods.”

I’m going to guess that Joe LaCava and Charlie Woods were out of the frame but pushing him, each in his own way. The session reminded me of the spectacular footage, available through the magic of YouTube, of Hogan explaining his swing to George Coleman in George Coleman’s South Florida backyard, a feature of which is the Atlantic Ocean. (The balls were irretrievable; it was not a carbon-neutral session.) There are layers upon layers with anything involving Tiger Woods’s public life, and he reveals almost nothing about his interior one, which is what will determine most whether he can be a tournament golfer again. (Third ‘graph of the NPR — NPR! — story about the clip is telling: “‘Making progress,’ he captioned the post.”)

But I take those three seconds for what they are: the miracle of medical science, the drive of a singular man, the demands of the marketplace. He has to sell his Albany event, his Riviera event, his restaurant and all the rest. Golf clubs, golf courses, a huge educational foundation. That requires a public life and so a moment from an otherwise  private session was released for the world to dissect. (Some will say the mini-clip shows his ego at work. I wouldn’t agree, but it does show that the laws of supply-and-demand require some supply.) What the clip ultimately shows is Tiger at his core. He’s a golfer.

Josh Sens, senior writer (@JoshSens): My reaction was, cool — we’ll see him at the Masters. This wasn’t some sneak-peek video shot by golf-world paparazzi. Woods posting it himself suggests bigger things coming. Or so we can hope.

2. Jin Young Ko fired a final-round 63 to win the CME Group Tour Championship by one shot and with it, the largest check in LPGA history. With the win, Ko also claimed Rolex Player of the Year and reclaimed World No. 1, taking both titles from Nelly Korda. Who had the better season — Ko or Korda?

Dethier: Korda also won a gold medal. I’m a sucker for the big events, so I’ll give Korda the nod. She put it pretty well post-round with this quote: “I could come out of this thinking, Hey, I didn’t win an award. It wasn’t that good of a year. But if I look back, it’s like, ‘Jesus, I’ve done a lot.'”

Bamberger: Nelly Korda won a major and one a gold medal. Do I need to say more than S&S already have? (Sean-’n-Sens.)

3. Ko finished her week by hitting a preposterous 63 greens in regulation in a row. Yeah, you read that right: After missing the green at No. 9 on Thursday in her opening round, Ko hit every single green in regulation the rest of the week. Can you think of any ball-striking feat that matches this one?

Zak: No. That’s laugh-out-loud preposterous. Think of how much easier this game becomes when you don’t have to hit a single nervy short-game shot. Just putts. That’s it. It’s incredible.

Dethier: Good grief, no. Tiger Woods was so good with his irons that I’m sure he has put together some incredible stretches of dart-throwing. But I’d be surprised if anyone has ever shown this kind of consistency. I’m thrilled if I can hit two irons on target in a row. This is a whole new level of consistency combined with precision.

Sens: Tiger not hitting a single bunker over the course of an entire British Open on the Old Course in 2005. That was certainly up there, especially when you take into account the quirks of that style of golf.

Bamberger: Not readily, but Big Jack, in the first round of the 1975 Masters, hit every green on each of the par-3s and par-4s in regulation, and reached each of the par-5s in two. He shot 68 with two putts on every green. He played with Curtis Strange, then one of the best amateurs in the world. Curtis saw up close how much better a person could play the game.

4. Collin Morikawa claimed the Race to Dubai with a win at the DP World Tour Championship on Sunday. Morikawa birdied five of his last seven holes to win by three shots. By contrast, 54-hole leader Rory McIlroy made bogey at 15, 16 and 18 to finish five shots back (and showed his frustration by tearing up his shirt afterwards). What’s one thing you learned about each Morikawa and McIlroy in their European season finale?

Zak: Didn’t necessarily learn this from Morikawa, but was reminded that no lead is safe with him around. Holding that guy down for four straight rounds when he’s playing well is damn near impossible. As for McIlroy, he at least has a really strong fall to build off. He spent a lot of time in contention. He’s probably one of the six best players in the world right now, which is more than he could have said two months ago. Progress will have its peaks and valleys.

Dethier: Morikawa reminded me that some statistically “bad” putters can look like really damn good putters when they get hot. As for McIlroy? He may have perspective, he may be thoughtful, he may be reflective — but he’s still intensely passionate and he still plays golf and he’s been spending enough time in the weight room to tear up his shirt without working particularly hard.

Sens: I’m not sure there was much new to learn here. We’ve seen this kind of relentlessness from Morikawa before. And these kinds of wild swings from Rory. Is there a less predictable member of the Tour’s upper crust when playing with the lead? Seems that way. But I guess I’ll have to ask Mark Broadie to confirm.

Bamberger: That polyester shirts rip more readily and in a less linear way than cotton ones. Cotton has a grain to it, just as newsprint does. Polyester shirts are a glorified oil product that a million washes cannot disintegrate. As for Morikawa, it was further confirmation of what we’ve known about his for a while: one of the best players in the game, tee-to-green, and when he putts well better than that.

5. Talor Gooch claimed his first career PGA Tour victory with a three-shot win at the RSM Classic on Sunday. We still have the Hero World Challenge to play, but the conclusion of the RSM marked the end of the full-field Tour fall season. What’s one single moment you’ll remember from this stretch on Tour?

Zak: Call me a homer but I’ll remember for quite a while just how nervous I was during the Houston Open as a friend was grinding out his first time in contention in years. It wasn’t going well. It made watching golf difficult and gut-wrenching. I didn’t like it at all! But I supposed I had to like it in the end. A top 5 finish for Martin Trainer.

Dethier: I’ll remember a hilarious combination of wind and rain making for some terrific television at the Bermuda Championship. But let’s call that the runner-up moment. No. 1? I’ll remember Hideki Matsuyama making eagle at No. 18 to win the Zozo Championship in front of a supportive home crowd, bookending a terrific year for the Masters champion.

Bamberger: Rory’s grace after winning over Rickie Fowler, his Sunday playing partner and the event’s 54-hole leader. The power of Brian Morris’s two rounds in Bermuda.

6. This Thursday marks Thanksgiving. (There’s a good chance you already knew this before now.) What’s one golfy thing you’re feeling thankful for this year?

Zak: About five months ago, a friend and I played a cool, spring round just outside Chicago. He couldn’t get the ball off the ground. Nothing flew straight. His score wasn’t going to eclipse 120. Once a solid, bogey-golfer, he had fully lost touch with his game. But ONE single GolfTec lesson fixed him up proper. Just a swing thought or two — and a setup maneuver. We pegged it at the same course Saturday, and suddenly his irons had launch to them again. His drives flew smooth and straight. He played plodding, uneventful golf — the kind you long for on our worst days. It added up to an 88, and he was thrilled. A golf buddy whom I thought I had lost was back in the fold. If only it wasn’t our last round of the year!

Sens: The endless search. I’ve been lost in a zillion swing thoughts this year. But it has to get better, right? Tomorrow. The next day. The next round. The next swing. Hope springs eternal. That’s always been golf’s greatest gift.