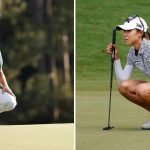 The comparisons feel accurate! Jordan Spieth and Lydia Ko have both shrugged off lengthy winless streaks this month.

Welcome to the Monday Finish! This is where we’ll tally the scores for the week that was and tee you up for the week to come. Following Masters Week, this one’s slightly shorter than usual but we’ll get into Lydia Ko’s win, what we can learn from her approach, plus thoughts on Stewart Cink, a speedy cameraman and a 6’9 phenom.

On Saturday, as she prepared to finish off her first LPGA victory in over 1,000 days, Lydia Ko wrote a short note on her pin sheet:

That was her mindset, passed on from coach Sean Foley. It worked. Ko’s closing seven-under 65 left her seven shots clear of the field. It meant the end of her winless drought. And while Ko has been playing top-tier golf since last summer, she needed to lift a trophy to complete her comeback.

After her round, Ko talked about how she’d seen Jordan Spieth and Hideki Matsuyama snap winless streaks of similar length each of the last two weeks. They had similar things to say afterwards. Spieth referenced “trusting shots” and “gaining confidence under pressure.”

Matsuyama said, through a translator, that he had “found something” which had allowed him to play to his potential. “When that happens, the confidence returns,” he explained.

There’s a beauty and simplicity to their messaging that I think we can all learn from. It’s also worth noting, though, that “trust and conviction” on their own wouldn’t have gotten any of these golfers back into the winner’s circle. I could go out to the 1st tee at Harbour Town right now with all the trust and conviction in the world and I still wouldn’t have been able to catch Stewart Cink.

But Ko, Spieth and Matsuyama each have the skills required to win at the game’s highest level. They’ve built their games on foundations of talent, hard work and attention to detail. Once they’ve reached a certain threshold, they’re always just one perfect click away from everything falling into place. That’s where trust, confidence and conviction come in — they’re often the tiebreakers on Tour, where everyone has a baseline of ability.

What’s the lesson for anyone trying to achieve peak performance in, well, anything? The Thomas the Tank Engine “I think I can” approach can get you far, but it can’t take you all the way. Real trust must be earned. Conviction can’t be manufactured. And confidence works best when built up over time. Anyone who has ever tried hard at anything knows how easily doubt can creep in. But if you’ve followed all the right steps to get to the top, like Ko has, there’s only one thing left to do: execute to the best of your ability.

That’s when you can tap into the trust and conviction.

Ko won the LOTTE Championship at 28-under 260, the third-lowest winning score in LPGA history. Dating back to Sunday at the ANA Inspiration, her last five rounds have been utterly ridiculous: 62-67-63-65-65. That’s 38 under par and just one single bogey over that stretch.

Stewart Cink won the RBC Heritage, joining Bryson DeChambeau as the only two-time winners this PGA Tour season. If you watched the broadcast, you already know this next bit — but Stewart and his son Reagan Cink have caught lightning in a bottle. Reagan took the bag for a week last fall and his dad promptly won for the first time in 11 years. Now, just a dozen starts later, he’s a winner again.

Cink has now won seven PGA Tour events in his career. John Catlin has just six PGA Tour starts to his name. But he’s won professional events in seven different countries — interestingly, none of them in the U.S. — after taking down the Austrian Golf Open over the weekend. The win is his third in his last 13 starts on the European Tour and he’s now ascended to No. 79 in the world. That’s pretty high for someone who has never played in a major championship. But now we’ll see Catlin at the PGA Championship!

Inbee Park continued her march in the direction of world No. 1 with a final-round 63 in Hawaii that left her T2. She was in good company: World No. 3 Sei Young Kim and World No. 4 Nelly Korda joined her at 21 under. Also T2: Leona Maguire. The runner-up finish was the highest of her career and a game-changer for Ireland’s top female golfer.

“I’ve been calling home and calling my coach and saying, ‘It’s close, it’s close.’ So it really is close now,” she said after the round.

With blowout winners on both the PGA and LPGA Tours, it was a week for feel-good runners-up. Emiliano Grillo was pumped up about his T2 at the RBC, too.

“It’s one of those weeks that I’m happy with finishing second. I’m happy to be the first loser,” he said.

Fellow runner-up Harold Varner III hit his opening tee shot O.B. but rebounded to post the best result of his professional career and jump 70 spots in the world ranking. He, too, took the big-picture view.

“I really love playing golf,” he said. “I always have, always will, whether I play out here or not. Yeah, it was good. And the birdie at the last was awesome.”

He’s guaranteed to be playing “out here” for a while longer.

The European Tour featured one runner up who likely left the course less satisfied. At the Austrian Open, Catlin and Max Kieffer tied the first four playoff holes before returning to the par-3 18th. Kieffer dumped his tee shot in the water. Then he splashed two more from the drop zone. The tournament ended with a bit of a thud when Catlin ended up tapping in for a winning bogey — but I’m betting he didn’t much mind.

Over the weekend, Ko broke the fourth wall when she handed the cameraman some watermelon.

It was a sweet moment that revealed something about Ko and her approach. It also reminded us that yes, there are real people behind those cameras. The next day, during the LOTTE final round, we got another great reminder of the same thing, captured by Ryan Ballengee.

Check out the wheels on the camera guy! LPGA announcer Grant Boone identified the cameraman in question as Scott Winder. Here’s to you, Scott. We love the hustle.

The inside scoop from Georgia.

Stewart Cink’s meteoric rise from obscurity back inside the world top 50 came as a surprise to just about everyone, including his wife. But it didn’t surprise Chris Kirk.

“When the Tour was shut down during the Covid quarantine, with time off, Stewart was running these little money get-together games in Atlanta, and I think he won almost every one of them,” Kirk said after his round on Sunday. “He was shooting 63 or 64 almost every day. Anybody from the Atlanta area is probably not too surprised to see that he’s been playing great.”

There you have it. Never underestimate the hot hand in a money game, even when it’s a 47-year-old who hasn’t won in a decade.

Saturday it was 77 and sunny. Sunday it was 76 and sunny. The sun doesn’t set until 8:15. Golf season is rounding into peak form. I’m rounding out my wish list of regional courses to check out this summer. This might be the greatest place on Earth. I also might feel differently in three days.

Last year’s L.A. Open got canceled for Covid-related reasons but it’ll be fantastic to see the LPGA return to competition at a classic L.A. venue like Wilshire Country Club. The best players in the women’s game all seem to be rounding into form, and the odds reflect that — Ko and Park go off as co-favorites, with Nelly Korda close behind.

At the Zurich Classic! It’s easy to see why fellow Nike-wearing big-swinging Cameron Champ and Tony Finau would pair up at the Zurich. It’s no surprise to see Xander Schauffele and Patrick Cantlay reprise their Presidents Cup pairing. Same with roommates Maverick McNealy and Joseph Bramlett. But how did Rasmus Hojgaard connect with Vaughn Taylor? How did Scott Piercy pair with Akshay Bhatia? Some teams will have natural chemistry. Others might find unexpected connections. Even if the Zurich isn’t your bag, it’s something different  — and worth a peek on Sunday, at least.

You don’t have to watch him this week, because he just missed Monday qualifying for the Korn Ferry Tour, but here’s your reminder: Young Tommy is 16 years old, he’s pushing 6’9 and he’s coming to win your golf tournament.