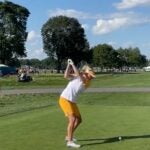 While the penalty for missing hitting in the rough at Inverness can be steep, it hasn't stopped players from aiming away from this fairway.

TOLEDO, Ohio — Inverness Club presents a unique challenge to players at the Solheim Cup this week. The Donald Ross design forces you to be precise with just about every shot on the property and missing a green in the incorrect spot can spell doom.

To access the devilish greens, you need to leave yourself a proper look. The rough around here isn’t exceedingly thick, but hitting out of it can still come with a steep penalty.

Inverness received a facelift in 2016 to restore some of these distinct features, but the renovation also removed many trees. This decision gives the course some fantastic vistas, but it also came with some unintended consequences.

Without groves of trees separating holes, players can get creative with the route they choose to take to the greens. Many holes — particularly on the back nine — zigzag across the property, and with the limited number of trees, players can hit onto other holes to get a better look at the green.

But why would players purposely aim away from the fairway they are supposed to be playing? The answer is simple — angles. Sometimes, aiming into another fairway can give players a better look into the green than if they’d played the hole the way Ross designed it.

Take No. 17, for example. Throughout the Solheim Cup, certain players have opted to aim well to the left of the fairway, toward No. 16, so they can have a better look at the green. As you can see in the image below, attacking the green from the 16th fairway can give the players more green to work with on the 17th depending on where the pin is located.

This was a popular strategy on 17 during the Sunday four-ball session. With the pin tucked in the back right corner of the putting surface, hitting an approach from the left side gave players a larger landing area and a better chance at holding the green.

This strategy was also employed several weeks ago at the U.S. Amateur, hosted at Oakmont Country Club, another course that underwent recent renovations to remove many trees.

Is this the way Ross and other Golden Age architects intended for their courses to be played? It’s not likely. However, Ross can take solace in the fact that even after 102 years of innovation, Inverness Club still provides a sturdy test to the best players in the world.