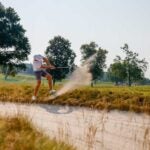 Oakmont was unrelenting during the U.S. Amateur.

How hard is Oakmont?

With awkward tee shots, pitched fairways and lightning-fast greens, there is no letup on the Henry Fownes design from the second you step on the 1st tee to when your ball finally drops in the cup on the 18th green.

On-course analyst and former caddie Jim “Bones” Mackay put it simply during the Saturday broadcast of the U.S. Amateur: “This is the hardest golf course I’ve ever seen,” he said.

These eight numbers from the 36-hole stroke-play portion of the 121st U.S. Amateur hammers home that point. (Oakmont and Longue Vue Club each hosted one round of stroke play.)

-74.94: The stroke average in the second round — after Oakmont was soaked by afternoon storms.

-527: Total number of birdies at Oakmont.

-329: Total number of doubles or worse at Oakmont.

-10: Number of players who broke par in their round at Oakmont.

-24: Number of players who shot over 80 in their round at Oakmont.

-1: Number of players who shot over 90 in their round at Oakmont.

Ryann O’Toole made 227 LPGA Tour starts prior to last week’s Women’s Scottish Open. In her 228th start, she finally nabbed her first win.

O’Toole closed strong in Fife, Scotland, on Sunday with a 64, enough to edge Lydia Ko and Atthaya Thitikul by three shots for her maiden victory.

After her win, she revealed that the grind of pro golf had taken its toll. The fatigue had gotten so bad that she had even been contemplating retirement. But just as she started thinking about who she was away from the course, everything came together inside the ropes.

“It’s just accepting there’s more to life,” O’Toole said. “There’s a future of other things, and I think that just kind of eased up out here rather than the pressure of just making the pressure — I’m Ryann in a lot of different ways rather than just Ryann the golfer.”

Sometimes letting go is all it takes.

Playing a golf course as difficult as Oakmont takes some imagination, and at the U.S. Amateur that creativity was on full display.

Over the last several decades, close to 15,000 trees have been removed from the property. The change has provided some breathtaking vistas, but it’s also resulted in giving players some unique options on how to navigate the course. Namely, playing down the wrong fairway to get better angles and avoid bunkers.

As Golf Channel’s Brentley Romine noted, players were fond of playing down the wrong fairways on at least six holes throughout the week, all in hopes of bettering their look into the devilish greens and avoiding penal bunkers.

“You have to dodge [the bunkers] at all costs,” Joe Highsmith told Romine. “If you have to go on another hole, then so be it.”

Though creative, the lines players took during the U.S. Amateur were likely not what Fownes had in mind when he designed the course over a century ago. Nevertheless, the course still proved to be a stern test as the stroke average for the week sat at a brutal 76.07.