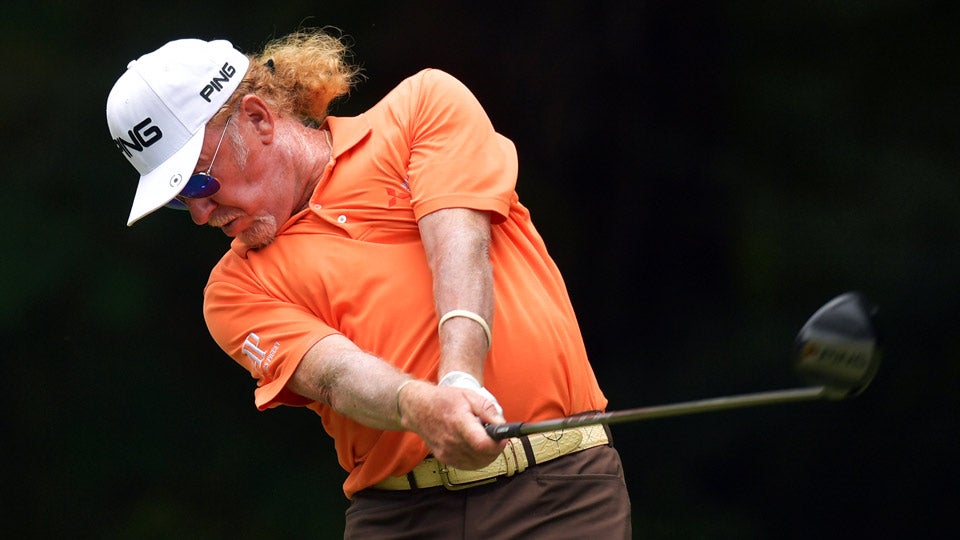 Miguel Angel Jimenez and Gene Sauers have a two-shot lead heading into the final round of the Champions Tour's first major of the year.

BIRMINGHAM, Ala. (AP) — Gene Sauers shot a 5-under 67 to move into a first-place tie with Miguel Angel Jimenez on Friday in the second round of the Regions Tradition, the first of five PGA Tour Champions majors.

Jimenez and Sauers were at 11-under 133. This was the first time either held or shared the lead after two rounds in a major.

Two-time defending champion Bernhard Langer was nine shots behind. He is trying to become the first to win three straight at the Tradition since it began in 1989.

Sauers completed his second straight bogey-free round. Jimenez had four birdies and a bogey for a 69 at Greystone Golf & Country Club, a day after matching the course record with a 64.

He had opened with a 66 and is seeking his second PGA Tour Champions victory. His first came at the 2016 U.S. Senior Open Championship.

Sauers had four birdies on the first seven holes.

“Then I kind of just slowed up a little bit, kind of put the brakes on for some reason,” he said. “Just the putting, I’ve got to get more confident in my putting. If I can do that, I’ll be right there on Sunday.”

Jimenez tied the course record with a 64 on Thursday, calling it “amazing.” He was solid in the second round as well not quite satisfied.

“I still feel like I left a lot of shots on the golf course,” he said.

Jerry Kelly, Kevin Sutherland and Scott McCarron are two strokes back going into the weekend. Kelly shot 69, McCarron 68 and Sutherland 66.

Sutherland and McCarron had eagles. Sutherland had a bogey-free round and eagled No. 8.

McCarron had his second eagle in as many days, this one on No. 13. He did finish with a bogey on the final hole from the bunker, saying it was a similar spot to Brandt Jobe’s. Both bogeyed No. 9 after starting on the 10th hole in a two-tee start.

“I tried to get really cute with it and really spin it hard and I just came up a little bit short,” he said. “But I made 5 — that’s probably what you’re going to make nine times out of 10 being where we hit it anyways.”

Scott Dunlap and Bob Estes had matching 66s and are tied with Joe Durant (69) four strokes back. Two-time champion Tom Lehman is in a group of six at 7 under, along with 2014 winner Kenny Perry.

Langer was at 2 under. He had two bogeys and two birdies on the first nine holes and made pars the rest of the way.

He was six back at the midpoint of last year’s Regions Tradition but won with a closing 64. This one would require an even bigger comeback.