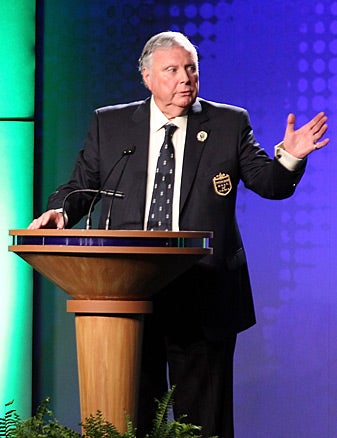 File this one under things you would never hear Jim Nantz utter from the tower at Augusta National.

On the BBC’s Masters broadcast on Sunday, the ever-colorful and sometimes controversial Peter Alliss was caught by a “hot mic” making a quip about Sergio Garcia’s fiancee’s attire.

Moments after Garcia sunk the winning putt in his playoff with Justin Rose, the 86-year-old Alliss said over the roars that Angela Akins had “the shortest skirt on the campus.”

The BBC released a brief statement explaining the situation.

“While believing he was off air, Peter made a lighthearted remark which he now knows was inappropriate,” said Gail Sullivan, a BBC spokesperson.

This is not the first time Alliss has found himself in hot water over comments about women. When Muirfield originally voted to not allow female members in 2016, Alliss suggested that anyone who wanted to be a member “better get married to someone who’s a member.”

In 2015, following Zach Johnson’s Open Championship win at St. Andrews, Alliss was rebuked for comments he made about Johnson’s wife, Kim Barclay. During the four-hole playoff on the Old Course, Alliss said of Johnson’s wife, “She’s probably thinking, ‘If this goes in, I get a new kitchen.'”