Brooks Koepka tried to talk trash Michael Jordan on the golf course, but it didn’t work 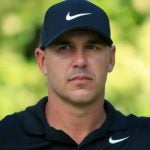 Brooks Koepka almost took down Michael Jordan in their match on the golf course. Almost.

ESPN’s “The Last Dance” documentary series has captivated the sports world over the last few Sunday nights, and most of the episodes include great golf stories. Like about how Jordan for Scottie Pippen into the sport, why Jordan likes to gamble and more.

Four-time major champion Brooks Koepka told his own Jordan story on SportsCenter with Scott Van Pelt on Monday, and Koepka re-told that story on The Dan Patrick Show on Tuesday.

Patrick asked Koepka about his trash-talking ability, and then asked if he trash-talked Jordan.

Koepka said his match versus Jordan was at Old Palm in Florida four or five years ago. Jordan was up early, then Koepka came back and was 1 up on the 17th tee, with Jordan getting shots on each of the last two holes.

“I said something to him, and he tees the ball up, takes a practice swing and goes, ‘It’s fourth quarter, baby, I don’t lose,'” Koepka said.

Jordan won the 17th to even the match and then beat Koepka on 18.

“He just kind of looked at me on 18, and on 18 green he shook my hand and wanted to know where my wallet’s at,” Koepka said.

You can watch the entire clip below. Koepka’s appearance begins at 1 hour, 34 minutes.

2020 U.S. Open live coverage: How to watch Sunday's final round at Winged Foot

Matthew Wolff is showing us something strange about fairways