Memorial Tournament live coverage: How to watch Round 3 on Saturday 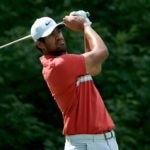 Tony Finau holds a share of the 36-hole lead.

The cut has been made at the Memorial Tournament and now the field will vie for the title on what is sure to be an exciting weekend. Here’s everything you need to know to watch the third round.

After two days of solid play on the difficult Muirfield Village track, Tony Finau and Ryan Palmer lead the stacked field at 9-under. Finau played flawless coming down the stretch Friday, carding three birdies over his final five holes to secure a pole position at the 36-hole mark. With much less fanfare, Palmer recovered from an early bogey by carding five birdies over his last 12 holes for a late tee time with Finau tomorrow afternoon. The pair will go off No. 1 at 1:50 p.m. ET.

Jon Rahm lurks a shot back of Finau and Palmer as he tries to win and overtake Rory McIlroy as the No. 1 player in the world. The big Spaniard was in control of his game all morning as he played alongside Tiger Woods and McIlroy, firing a 67 in Round 2. Woods was not nearly as sharp, shooting 76 to fall all the way to T64, making the cut on the number at 3-over.

Gary Woodland, Chez Reavie and Luke List sit three back at 6-under, while a log jam of contenders, including Jordan Spieth, Viktor Hovland and defending champion Patrick Cantlay, head into the weekend at 4-under.

How to watch Memorial Tournament Round 3 on TV

Golf Channel will carry early weekend coverage of the Memorial Tournament on the air from 12:30-3 p.m. ET, while CBS will take over from 3-6 p.m.

How to stream Memorial Tournament Round 3 online

If you have a cable TV subscription, watching the third round of the Memorial Tournament online will be easy. You can catch the early third round coverage on the Golf Channel broadcast on golfchannel.com. CBS will offer their own simulcast on CBSSport.com for the late window. Fans can also view Featured Group coverage of Round 3 all day Saturday via PGA Tour Live, though you will need an account to access the stream.