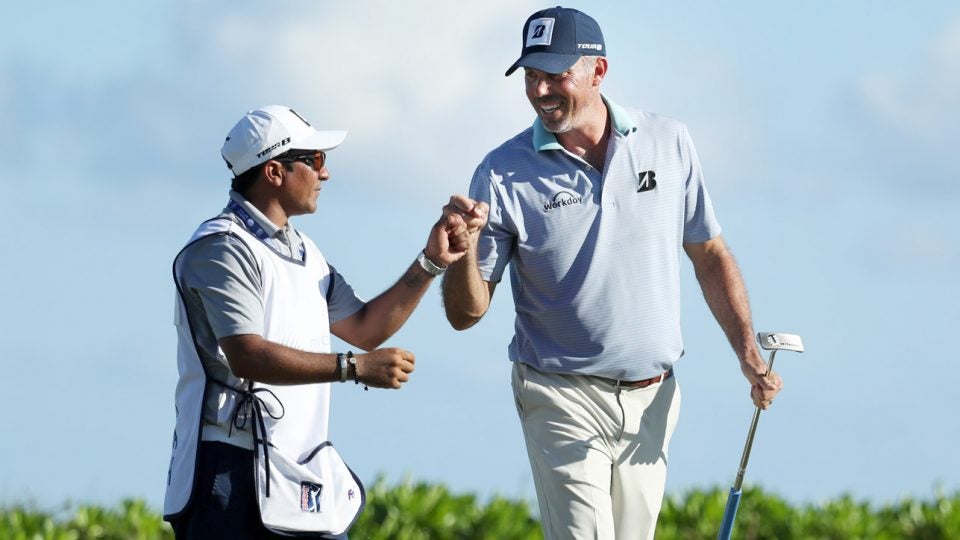 Most readers of this website know the backstory by now, but to recap: last year, Kuchar committed late to the event and needed a local caddie. The host course connected him to Ortiz, one of the best local loopers. Then, Kuchar went on to win the tournament — and collect the $1.3 million first prize — but only paid Ortiz $5,000, a far cry from a typical winning caddie’s payout, which is typically 10 percent and almost never below five percent. When the story leaked, collective outrage ensued and eventually Kuchar upped his payment to a reported $50,000.

Kuchar is back this week with his week-in, week-out caddie John Wood. But Ortiz was going to be bagless until an unlikely sequence of events: Jason Dufner’s last-minute WD meant Rob Oppenheim got into the field. Oppenheim laid out his simple dilemma to Golf Digest’s Brian Wacker: “I needed a caddie.”

Oppenheim got in Wednesday night from his home in Orlando, but regular caddie Dean Emerson, was going to have a hard time getting from Boston to Playa del Carmen, Mexico in time for the start of the event. Scrambling, Oppenheim reached out to tournament organizers and got El Tucan’s phone number from there.

“He lives here, was available and aside from everything that has gone on I was looking for the best opportunity to play well. He knows the course and has had success here,” he told Golf Digest.

In addition to piloting Kuchar to the win last year, Ortiz was on the bag when Alex Cejka finished T9 the year before. He’s also become a highly-sought caddie for visitors to the area who come play El Camaleon and request him on their bag. Oppenheim, a journeyman with two career top-10s on Tour, is hoping some of that success rubs off on him this week.

Oh, and that pay structure? Oppenheim said it’s been “mutually agreed upon.”

After Thursday’s round turned into a washout, Oppenheim and Ortiz will tee off at 12 p.m. Friday.