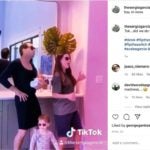 The Masters trophy made its TikTok debut.

As did a former Masters champion. In a black dress.

“Our first Tik Tok! Did we do it right?” Sergio Garcia wrote under his video on the social media platform.

In the first part of the video, Garcia, his wife, Angela, and their daughter, Azalea, are dancing to “Nonstop” by rapper Drake. To the right is Sergio, who is wearing sunglasses, a gray shirt and blue shorts. To the left is Angela, who appears pregnant with the couple’s recently born son, Enzo, and is wearing a black dress and sunglasses. Standing between the couple is Azalea, who is wearing a onesie and sunglasses. In the background is the Masters trophy, given to Garcia after his 2017 victory.

When Drake says, “I just flipped the switch,” Sergio hits a light switch.

As similar TikTok videos have gone, Sergio and Angela flip.

In the second part of the video, the three continue to dance. To the right is Angela, who is now wearing a gray shirt and blue shorts. To the left is Sergio, who is wearing a black dress — and holding Enzo (who was born on April 10). Azalea is still enjoying herself below. And the Masters trophy is still in the background. As the video ends, Angela kisses the head of Enzo.

“If only having a baby were this easy!  Seriously though we have daily dance parties… I absolutely love these 3!” Angela wrote on Instagram.