At the Masters, celebrity-spotting is a sport of its own 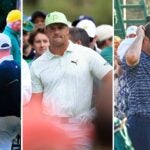 It's not just the course that's famous at Augusta National.

Three men in their 50s stood a few feet behind the rope line at Augusta National’s 13th hole. It was Masters Sunday, and Tiger Woods‘ ball was in a bush behind the green. He was mulling his options: Could he get a stance? Should he hit it backwards? What about left-handed?

The men weren’t watching. They were stealing glances back up the fairway at a man in the crowd. He wore a green shirt with an Augusta National logo.

“What’s he doing here?” the other asked.

He was here for the same reasons they were: To take in the wonder of the Masters and to watch Tiger Woods do battle with Augusta National. DeChambeau had missed the cut on Friday but stuck around for the weekend and stayed with Woods’ gallery the entire back nine. His presence underscored two basic truths about the Masters:

1. Everybody treats this tournament differently.

2. If you’re at Augusta and you think to yourself, “Hm, that looks an awful lot like X celebrity,” it is almost definitely that person.

One week out of the year, Augusta National teems with celebrities. How will you see ’em?! By walking around and keeping your eyes open. (It’s possible, of course, that the idea of spotting famous people is of little interest. If so, I’d encourage you to brush up on Augusta’s various fish and many species of plants. Or, I s’pose you could watch the actual golf.)

Your level of celeb-spotting success depends, of course, on your areas of expertise. College football fan? Maybe you spotted Nick Saban over the weekend. NFL junkie? There was John Harbaugh, striding from the ninth fairway towards the eighth tee. This ain’t his first rodeo; he’s spoken about chatting up Sam Darnold and Josh Allen at the 2019 Masters.

And wouldn’t you know it: Darnold and Allen were there on Friday, making their way down the right side of the first fairway as Woods stood on the tee, vying for vantage points alongside thousands of others. DeChambeau was far from the only celeb doing some Tiger-tracking. At least these two have one advantage over the rest of the patrons: height.

Quarterbacks dot the property. Free agent Ryan Fitzpatrick was there. Former Ohio State passer Kirk Herbstreit, too. Perhaps others. There was no sign of Patrick Mahomes nor Trevor Lawrence — who hung out at last year’s event — but maybe they snuck under the radar.

Pass-catchers, too. Larry Fitzgerald never seems to miss a golf event. And Lynn Swann was there, in a more official capacity: Augusta National member. (So is Peyton Manning — and, of course, NFL commish Roger Goodell.)

Major League Baseball commissioner Rob Manfred is a member, too. Sports bigwigs tend to do well at Augusta. Dallas Keuchel was on the left side of the 18th tee with golf influencer Roger Steele; they were soaking up some rays and waiting for Woods’ arrival. Ryan Zimmerman was on site too. Same with David Wright, retired Met. He was a big-time presence around the 2019 PGA at Bethpage Black. He was laying lower last week, which is pretty easy to do. Even if you spot somebody famous, everybody tries to play it cool.

Luis Figo was there, repping the soccer world. He and NBA legend Pau Gasol took a photo with Sergio Garcia. (Flip through his Instagram post below and see who’s tallest.)

Music stars abound. Niall Horan is a massive golf fan who once caddied for Rory McIlroy in the Par-3 Contest. He was on site. Country stars tend to like Augusta too; Nashville is just a short flight. Eric Church stopped in, as did Little Big Town.

But let’s say you’re more of a golf diehard. There are generations of big-timers walking the property. Sure, there are some folks you know will be there, like Gary Player and Jack Nicklaus and Tom Watson. But did you expect to see Tom Lehman strolling down No. 8? Perhaps not.

Active Tour players were patrons at the Masters, too. There was Harris English, emerging from the clubhouse. He actually qualified to be competing but is recovering from a hip injury. His home in Sea Island, Ga., is just a few hours’ drive away, but you don’t often hear of pro golfers WDing from events and showing up to watch anyway.

Maria Fassi was there, trekking the fairways. Augusta National has special meaning to her; this is where she was introduced to the world just three years ago, when she and Jennifer Kupcho battled down the stretch at the Augusta National Women’s Am.

There was Smylie Kaufman, smartly dressed in Ralph Lauren, following a group that included his buddy Jordan Spieth. It was just six years ago that he and Spieth were paired in the final group. He hasn’t played in the event since, and just once on Tour this year.

Golf’s movers and shakers were everywhere. Halfway down the first fairway, there was PGA Tour commissioner Jay Monahan side-by-side with DP World Tour commish Keith Pelley. The two tours have had a “strategic alliance” the last few years. These days, there’s plenty to talk about.

Walk past the clubhouse, down the sidewalk (the curbs here are painted green, too) and take a turn toward the driving range. There was Fred Ridley, Augusta National chairman, walking out of one of the club’s innumerable buildings. Perhaps that’s his office? Two other green jackets approached in a golf cart; they pulled over to greet him. They call him “Mister Chairman.” It seems strangely formal, but that’s kind of the vibe around Augusta National. He seems immensely popular among the green jackets.

There are, of course, the week-in, week-out big names of golf television, walking with a purpose across property. Dottie Pepper pacing the fairway. Brandel Chamblee and Rich Lerner heading to the “Live From” set. Scott van Pelt shaking hands by the clubhouse. They’re on display this week above all others.

Friends and family walk the course; Rory McIlroy’s father Gerry is among those who seems to rarely miss a hole. Wives and girlfriends dot the course and clubhouse. We see one family each year celebrate on the 18th green; think Paulina Gretzky with Dustin Johnson in 2020 or Tiger Woods and his family in 2019 before Meredith and Scottie Scheffler became golf’s newest First Family. But nearly every player has some sort of support system here to greet them post-round by the scoring area. Some are with friends, sipping azaleas, here for a good time. Others keep to themselves, hats pulled low, focused on the task at hand. Everybody’s glammed up; there’s a Kentucky Derby element to the style here, with one important distinction: Tracking your favorite golfer at Augusta National means hiking six miles.

What’s the point? Nothing, really. Except to remind you that if you win next year’s ticket lottery and end up at Augusta National, don’t forget to look around. Those watching the golf might be every bit as interesting as the tournament itself.