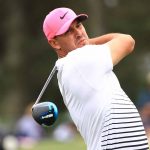 Brooks Koepka watches a shot during his second round at Augusta National.

This post will be updated as the Masters cut line changes throughout the second round on Friday.

Every player in the 2021 Masters has now officially finished or teed off for their second round, and as Friday evening looms at Augusta National, all eyes will be on the projected cut, which has all but guaranteed to send at least some pre-tournament favorites home.

As of 3 p.m. ET, the projected cut is three over, with 54 players at that number or better. Several big names currently playing their second rounds are flirting with the cut, names such as: Phil Mickelson (three over thru 17), Rory McIlroy (four over thru 4), Brooks Koepka (five over thru 6), Lee Westwood (six over, thru 4) and Jason Day (seven over thru 7).

Yet some other big-name players or favorites are already all but out of it. Matthew Wolff is eight over through seven holes, Patrick Cantlay is nine over through 16, and Sungjae Im, who just last year tied for second, is 11 over through 16.