Masters 2020: 5 things to know for Thursday’s first round at Augusta 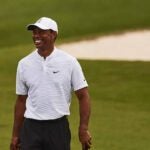 Tiger Woods begins his title defense at the Masters on Thursday.

Nineteen months. You made deals with the devil. You promised you’d never take another April for granted. You swore you’d never have to watch again, if you just saw this one.

But if we told you after Tiger Woods’ triumphant Masters victory in 2019 that it’d be 19 months until the next one, you’d probably start rethinking your stance. Nineteen months is a long time, particularly for golf fans, and particularly to go without Augusta National.

But you did it. And now, you’re staring straight into the light at the end of the tunnel. It is Masters Thursday, and by the time you’re reading this, the first golfers will have already teed off at Augusta National. Your long, personal nightmare is over, and a new green jacket winner awaits in just four days’ time.

Here are five things you need to know about Thursday’s Masters round one.

5 things to know about round 1 at the Masters

1. Tiger Woods’ path to repeating is a tricky one

There may be no player in the field at the Masters with a more obvious path to contention than Tiger Woods. Now, that’s not to say that Tiger is a guarantee to win, or even a favorite (at best, he’s a medium-to-long shot). That is to say if Tiger Woods is going to repeat his title at the Masters in 2020, he needs to storm out of the gates on Thursday. Here’s why.

With Augusta National opting for split tee times in order to speed up play, Woods drew the short straw. He’ll tee off on the 10th hole Thursday at 7:55 a.m. ET, which is bad news in two ways. First, Amen Corner will be among his first few holes for the week. And second, the earlier tee time could adversely affect his multiple-hour pre-round preparation.

If Tiger can get through the first hour of his Masters week without disaster, he’ll be off to a good start.

There have been rosier forecasts than the one for Thursday in Augusta, Ga. Meteorologists are calling for more than an inch of rain to go along with scattered thunderstorms for most of the morning and early afternoon.

We have no reason to doubt Augusta National’s state-of-the-art Subair system, but with tons of rain in the forecast, we’ll certainly be keeping our eyes on the conditions.

3. Bryson DeChambeau is primed to do something silly

Bryson DeChambeau’s Augusta National strategy is not secretive, nor is it particularly advanced. Bryson plans to step to the tee and, using every ounce of strength and speed afforded to him by his voluminous frame, blast drives into the great beyond.

If the practice rounds are any indication, DeChambeau will find some measure of success with his strategy, particularly on the longer holes. On Monday, he claimed to have only a pitching wedge left into the green after his drive on No. 13, a 510-yard par-5. On Wednesday, Bryson doubled down and said he’ll play Augusta as a par 67.

As you may have heard, Jon Rahm had back-to-back aces during his pre-Masters practice rounds at Augusta National. The first, which came in traditional fashion during Monday’s round on the 4th hole, and the second, when Rahm obliged the Masters tradition of skipping a tee shot across the water on No. 16 and just-so-happened to skip his ball straight into the hole.

While those of us at home try to reckon with the reality of a professional golfer unintentionally accomplishing a feat we have yet to achieve despite years of concerted effort, another question remains. What’s the proper way to view Rahm’s early week good fortune? Is it an omen for a major championship breakthrough, or is it a sign that he’s already exhausted his Masters good luck before the start of play Thursday?

5. Who are the Masters favorites?

DeChambeau has the highest odds of anyone in the field, but a whole host of players remain firmly in the mix. Rahm, Rory McIlroy, Dustin Johnson and Justin Thomas round out the Vegas favorites for the week. And that’s to say nothing of the mid-tier bets like Xander Schauffele, Patrick Cantlay, Jason Day, Matthew Wolff or Collin Morikawa, any of whom have recent major championship success, previous success in the Masters, or both!

Streaming begins Thursday monring on Masters.com and ESPN+ and continues through to the evening, so get in there and start consuming your green jacket goodness! If your boss starts to bother you, just remember, it’s been 19 months in the waiting.