Pro, in victory, gives one of the more open and revealing interviews you’ll hear 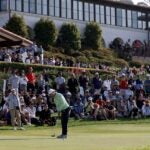 Marina Alex on Sunday on the 18th green at the Palos Verdes Championship.

There are probably other, less let’s-get-right-to-it ways for a reporter to start a winner’s press conference, but here we are. Though the truth is, it had been a while.

There are also probably other ways she could have answered — namely, can we please talk about anything else? — but she didn’t. We’re better for it. Over the next 20 minutes or so, Alex offered up one of the most sincere interviews you’ll ever hear. It was enlightening. It was educational.

First, the background. On Sunday, at the Palos Verdes Championship, Alex became your latest LPGA winner, with a one-shot victory over world No. 1 Jin Young Ko. In 2018, Alex won for the first and, before Sunday, only time, with a four-shot victory at the Portland Classic. In 2019, she was a cut-making machine, playing on the weekend in 21 of her 24 events. In 2020, Covid hit. You know that story well.

But for Alex, the LPGA Tour’s subsequent hiatus was … well, she can describe it best. Over the course of her interview on Sunday, at various points, she was asked about the break, a back injury that may have happened because of it and just hanging on.

“How much does this mean? You were telling [Golf Channel analyst] Karen Stupples, I’m getting older.”

“A lot,” Alex said. “Yeah, I’m not going to lie. If you had talked to me last year or the beginning of even this year, I didn’t think was even a remote possibility that I was going to win ever again. I didn’t know how much longer I really wanted to be golfing ever again.

“I mean, I’m getting older. My back has been a struggle. You know, Covid changed a lot of things, changed people. My priority of being home and kind of just spending more time in one place and feeling a sense of community has been important to me.

“It’s tough. Like the tour life takes you away from that, so I’ve had a lot of struggle, I think, internally with what I want, the direction I want to go, what my next steps are in my life. I think a lot of that is — not that it’s distracted my golf, but it’s definitely made me a bit more realistic of like my future. I went into this year, and I was like, I don’t know how many more years I’m going to play, if I’m being perfectly honest.

“I just want to give it my absolute best this year and put every single opportunity into playing and putting myself in contention and trying to win tournaments. And, I mean, it’s amazing that it’s happened. I didn’t know if it was going to. My outlook this year was to go back to like 100 percent, and wherever that left me, that left me.

“The day I want to step away from playing, I feel like I will have given everything that I have given to this game and to myself and to everyone that’s helped me get here. You know, I owe so many people a lot. So it’s been a tough journey, but I do think my perspective has changed a lot since 2018.”

A few minutes pass in the interview.

“Just last couple years you said have been tough.“

“I know we all know you had been battling a back injury. Do you know what caused that back injury?“

“Just a lot of overuse over time,” Alex said. “I think when I really think back about it, Covid probably caused that back injury, if I’m being honest. A lot of time away from golf, not swinging. A lot of time just didn’t know what to do.

“I was working out twice a day because I was bored in my house, going on runs. I was doing all sorts of things I would never in a thousand years do in my normal routine. I think it put me in a pretty vulnerable state, if I’m being honest.

“After about four events into the restart in July, I was not in a good place at all. I’m also used to having a physio therapist out there and I’m getting pretty regular treatment, and none of that was happening when we were in lockdown. A lot of things went unchecked, and just — I wouldn’t call them bad habits; it’s just everyone had to fill their time some way. None of that was productive for my golf unfortunately, and it kind of just spiraled.

“I was in a place that I didn’t want to admit — you know, I tried to come back to play the end of the year in 2020 because the Open had been rescheduled. There was CME. I was still eligible for all those things, and I really wanted that. Knowing that I was going into a Solheim Cup year I was like, I really want to try to like get some sort of starts in 2020.

“I set myself back again trying to get ready, and then it derailed the whole restart until pretty much end of February, beginning of March. Even at that point, I didn’t even feel that great. So I’ve come a long way from there. You know, over a year later I feel as strong and healthy as I’ve been, which is great. Knock on wood that that’s where I stay.”

In 2020, Alex played in four events after the restart. Last year, in 20 events, she had one top 10. In May, she began working with Claude Harmon III, whom she credited for her turnaround.

A few minutes pass in the interview.

“You mentioned you weren’t sure and still aren’t how long you want to play.”

“Does this change that at all?“

“I don’t know. I don’t know at all,” Alex said. “I mean, this is amazing. It was a goal this year, if I’m being honest. It was a goal amongst like my family and people close to me. I was like, I really want to win this year no matter what I decide to do with continuing to play or the rest of my career. I would love to be in contention and win another tournament.

“That would make me feel extremely fulfilled, and it is. I want to keep putting myself in that place, but I also like want to acknowledge how I feel physically, mentally, and what I want to do with the rest of my life.

“I love golf very much. I’m just going to see what happens.”

Next week, the 31-year-old New Jersey native comes home. The Founders Cup, the next LPGA Tour event, is being played in Upper Montclair Country Club, about a 15-minute drive east of where she grew up, in Wayne.

“What kind of celebration are you looking forward to when you swing by home?”

“Yeah, next week is going to be crazy now that I’m going back there in a week and a half,” Alex said. “I’m going to really close to where I grew up, so I have a lot of childhood friends I’m going to see. I’m staying with my godfather, so going to be some celebration definitely going on.

“Then going back to Palm Peach next week, and I have some golf friends that are going to be in town, so I’m sure there will be some celebrating there. I’ll make sure of it.