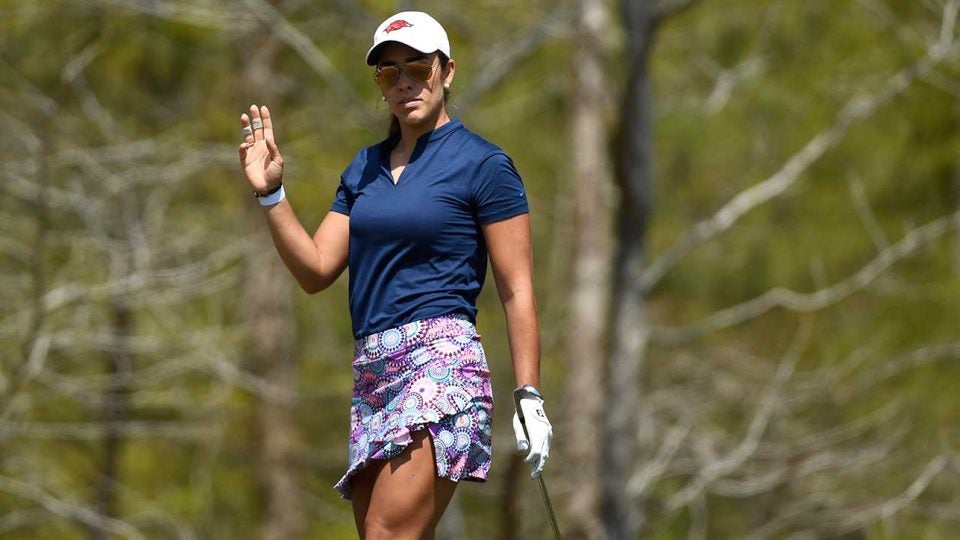 Maria Fassi overcame a potential golf club crisis and moved herself into contention after one round at the Augusta National Women’s Amateur.

But life wasn’t so stress-free a few days earlier.

Fassi, an Arkansas senior and one of the favorites at this week’s inaugural event, met assistant coach Mike Adams at their home course on Monday morning, grabbed what she thought was her travel bag and then hitched a ride to the airport for her 6 a.m. flight.

“I was still asleep and saw a bag and grabbed it and didn’t even think about looking at the name tag or anything,” Fassi said on Wednesday. “Of course, we all have the same travel bags and they looked exactly the same to me at 4 in the morning.”

Fassi, the 2018 ANNIKA Award winner as the top collegiate female golfer, didn’t realize her error until she checked the bag and saw teammate Kaylee Benton’s name plastered on it. “I thought, Oh my God, what am I going to do,” she said.

Tournaments
Survey: 40 pros offer their unvarnished takes on Augusta National and the Masters

Fassi called Adams and told him about the mishap, but luckily Benton was Augusta-bound, too. She got into the field on Friday when Lucy Li withdrew due to an injury. All Benton had to do was bring Fassi’s clubs when she flew out later in the day.

“I knew she was going to be getting in around 3 that day,” Fassi said. “Then her flight got delayed a couple hours and she was going to miss her connection and another flight got canceled, and I was like, You’d better get here because I need my clubs for tomorrow. But she ended up getting here at like 7:30 or 8. It was really nice to see her with my clubs.”

Fassi missed out on a practice day on Monday, although she said she would have just chipped and putted anyway. Instead she relaxed, napped and worked out.

“I was ready to go for a practice round [Tuesday],” she said. “So I think in the end it wasn’t too bad.”

Fassi, the ninth-ranked women’s amateur, opened with a two-under 70 and is tied for fourth, two off the lead. Her second round begins at 10:36 a.m. ET on Thursday.