This Solheim Cup was so riveting neither team deserved to lose. Alas, there is no room for sentiment in the history books — or in our grading. Without further ado, here’s the bottom line on all 24 players and both captains.

The 21-year-old rookie was a rockstar, lifting the Americans with her superb play and buoyant team spirit. It’s not an accident that Nelly was sent out second in singles, and she put the crucial first point on the board for the U.S. while the other early starters stumbled. She will be a cornerstone for the next couple of decades.

She got her kid sis off to a good start by guiding her to a dominating Friday foursomes victory, and Jessica’s veteran leadership never stopped, including a singles win that pushed the U.S. ahead after a sluggish start. Her goofy dancing on the first tee on Saturday morning was symbolic of how Korda set the tone for the Americans who were joyous and loosey-goosey…until the last half hour of singles.

The birdie machine made a stellar Solheim debut, notably leading a comeback in Friday foursomes to steal a momentum-shifting halve and then making the winning birdie in a taut Saturday four-ball match against Euro powerhouses Pettersen and van Dam. Her blowout win in the ninth singles match was a strong statement. 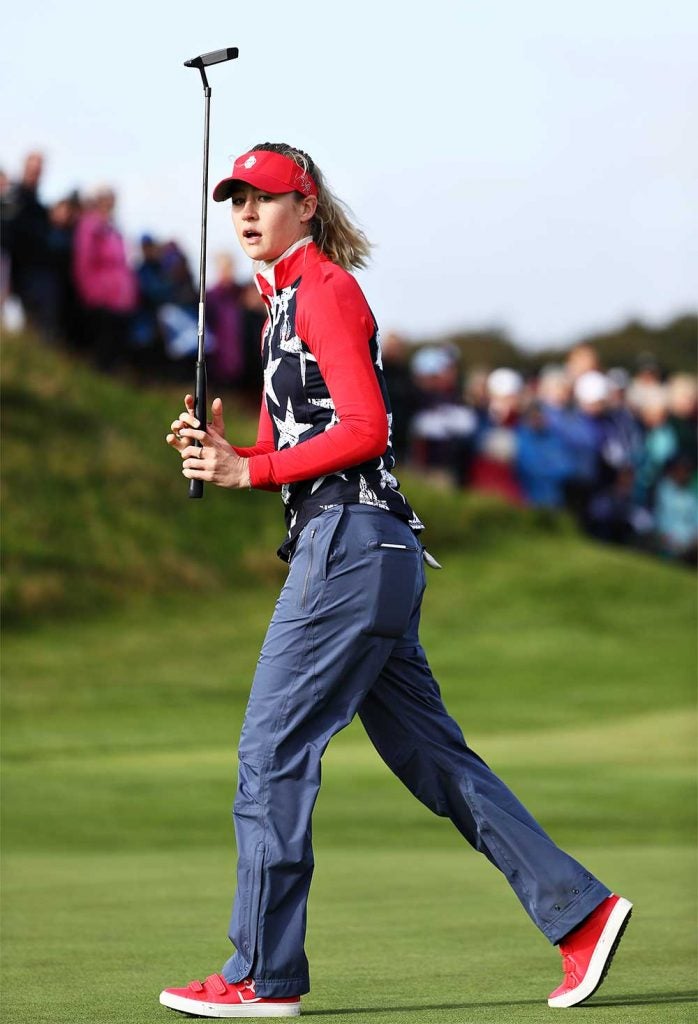 Nelly Korda might have been a Solheim Cup rookie, but she played beautiful golf all week.
Getty Images

The long-hitting rookie was a huge part of the tone-setting 7-and-5 Friday four-ball win, and she took down the red-hot A. Munoz in the massively important fifth singles match. Yin is a tender 20 years old, meaning her power game is going to enliven many future Cups.

The wily vet showed a ton of heart by shaking off an 0-2 start to come back and put two crucial points on the board, including a gritty 1-up singles victory over van Dam that looked for a while like it would key a U.S. victory.

The captain’s pick was terrific in team play but ran into a red-hot Nordqvist in the anchor singles match. Was this the sixth and final Cup for the 31-year old grinder? Maybe, but she will certainly get the nod as a captain someday.

Can’t imagine a more brutal position for a rookie, having to play the baddest woman on the planet (S. Pettersen) with the Solheim Cup on the line. Alex summoned plenty of clutch shots but, in the final analysis, had a 12-footer on the final hole to retain the Cup and missed it on the low side. She’ll be thinking about that putt for the rest of her life…if not longer.

The 24-year-old was solid in partner play but got her clock cleaned by Celine Boutier in the fourth singles match.

Another bad beat for a Solheim rookie, who was a last-minute replacement for the injured Stacy Lewis. She’s never won an LPGA tournament but was thrust into a do-or-die position in the 11th singles match against feisty Bronte Law. Bogeys on three of the last six holes sealed McDonald’s fate — and the Americans’.

The 21-year-old rookie salvaged her entire Solheim by winning the 18th hole in a singles match versus Charley Hull, stealing a halve in the sixth match that looked like it might be monumental.

After three previous star turns at the Cup the U.S.’s most decorated player looked jumpy and jittery all week, especially on the greens. Tweaking her back on the range before her singles match added injury to insult. 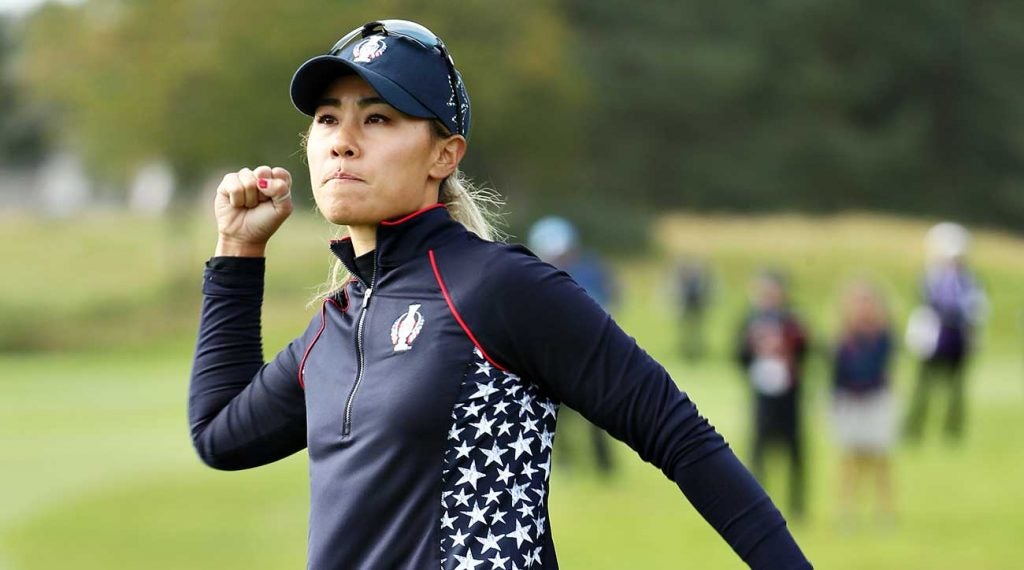 Kang was the first match out on Sunday but Europe got the point.
Getty Images

Her press conference woofing added a big buzz to the Cup but, rather than embracing the heel turn, she seemed intimidated and overwhelmed by the inevitable blowback. Captain Inkster still showed a lot of confidence in her U.S. Open champ by sending her out first in singles but Kang wilted at the finish in a dispiriting loss.

Her dedication to resting players meant the red-hot Korda sisters each got benched for a session, an eminently second-guessable choice in such a taut Cup. Worse was having untested rookies in the 10 and 11 spots in singles; when the Cup came down to those matches Inkster’s choices couldn’t deliver.

As a captain’s pick who has hardly played over the last year following the birth of her son, Pettersen was already on the hot seat. To deliver the Cup to Europe with a walk-off birdie is simply legendary.

What a debut for the sweet-swinging 25-year-old! Her defeat of Annie Park in the fourth singles match helped apply a ton of early pressure on the U.S.

The 2018 Women’s British Open champ continues to see her star rise. Only 23, Hall is going to be a Solheim force for a long, long time. Sorry, Yanks. 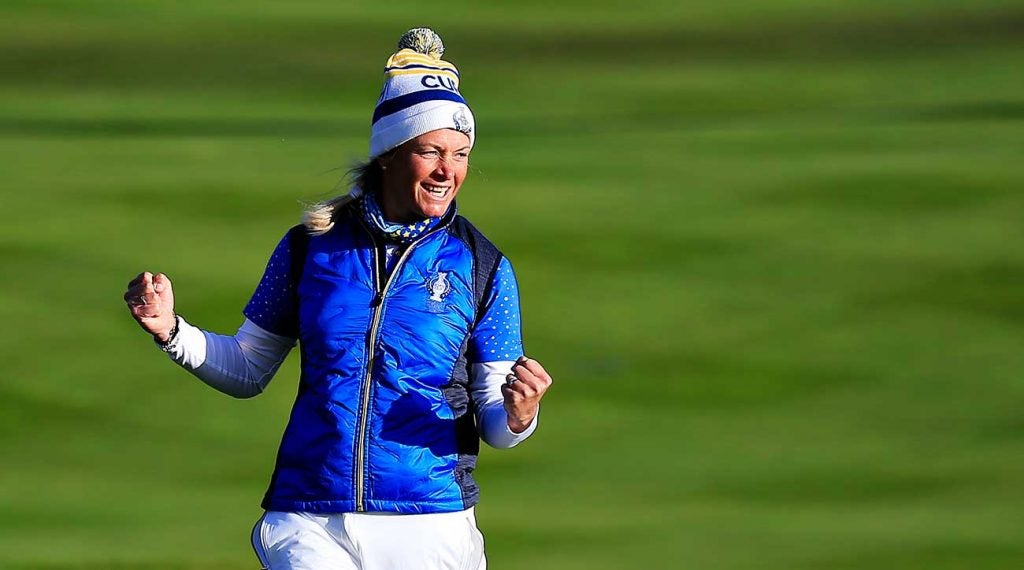 Suzann Pettersen needed a captain's pick to get on the team — but she earned it.
Getty Images

She was searching for her game all week and finally found it when it mattered most, gutting out a monumental singles victory that set up Pettersen’s heroics. This supremely confident 24 year old from England (who went 5-0 at the ’16 Curtis Cup) is on the verge of becoming the Ian Poulter of the Solheim Cup.

The feisty Englishwoman made a mess of the 18th hole in singles to gift a half point to Khang, and for a while that loomed large. In the end, what matters is the three points Hull put on the board as she continues to emerge as Europe’s emotional tone-setter.

The Spanish veteran provided so much leadership in partner play but got dusted by Yin in singles. It was nice to have her back in the matches after she missed out in 2017.

Her takedown of Kang in the opening singles match set the table for Europe. Not coincidentally, it kept Ciganda undefeated in singles in four Solheim appearances.

Playing in her sixth straight Cup, the Swedish vet redeemed two previous singles losses to Pressel when it mattered most, in the 12th and final match. What a warrior.

The much ballyhooed rookie seemed to always be in the middle of the action but she struggled to justify the hype. Her debut ended in tears with a bad bogey on the 17th hole and a disappointing birdie miss on 18 in a singles loss to Salas.

All three players struggled mightily but since Europe won no harm no foul.

Choosing the mostly retired Pettersen could have been the most second-guessable captain’s pick in Solheim history but clearly Matthew knew what she was doing. And she juggled her singles lineup perfectly, making sure her grittiest players were in position to bring home the Cup.