At site of past heartbreak, Ariya Jutanugarn rallies for emotional victory 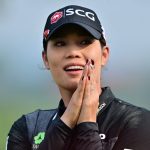 Ariya Jutanugarn rallied with a Sunday 63 for a meaningful victory in Thailand.

In 2013, Ariya Jutanugarn arrived at the 18th hole at the Honda LPGA Thailand with a two-stroke lead. Jutanugarn was 17 at the time and on the cusp of a dream victory in her native Thailand. She walked off with a triple-bogey 8 and a broken heart.

This year was distinctly different.

Jutanugarn began Sunday’s round at the same event five shots back, at the edge of contention. But she roared out to a hot start with birdies at each of the first three holes. Then she birdied 6, 7 and 9 to go out in six-under 30. Birdies at 10 and 12 got her to eight under for the day. The key to her torrid start, Jutanugarn said, was commitment.

“I think it was the first round in the last two years I played without thinking about the outcome,” she said afterwards. “All I wanted to do is have good commitment, making sure I’m proud of the shot I hit.”

There was plenty to be proud of. Jutanugarn held steady down the stretch, making pars on her next five holes before arriving, again, at the pivotal par-5 18th.

“I will say on the 18th hole I had so much going on, something in my head about 2013 when I made 8,” she said. “Before I hit the shot I told myself, you know what, even if I make bogey, miss the tee shot, whatever, just do your best and whatever happens, I can take it.

This time, she made birdie, capping off a round of nine-under 63 that sent her into the lead by a single shot.

After she finished, Jutanugarn had to endure a long wait while the groups behind her sat through a lightning delay and then closed out their own rounds. She practiced nervously, awaiting news. She sat on the driving range with her sister Moriya, listening to music. Then she made her way to the putting green where, at her caddie Pete Godfrey’s insistence, she didn’t watch the last groups coming in but waited and putted instead.

Atthaya Thitikul, also a Thai pro, made bogey at 17 and needed birdie to force a playoff at 18. But when she finished out for par, victory belonged to Jutanugarn.

The win was her first in nearly three years. As Godfrey delivered the news, she broke down in tears.

After the round, she explained her emotion.

“It just feels so good, not only for a Thai player to win, but I would say I’ve had a really tough time last two years,” she said. “I don’t know how many times I told my psychologist, like, you know, ‘I want to rest, no more. I want to stop for a while.’

“Every time when I look at all the kids, I want them to give them inspiration. So I feel like you know what, don’t give up. Do your best. Try harder. Keep trying. One day you will get it.”

On Sunday, she did just that.