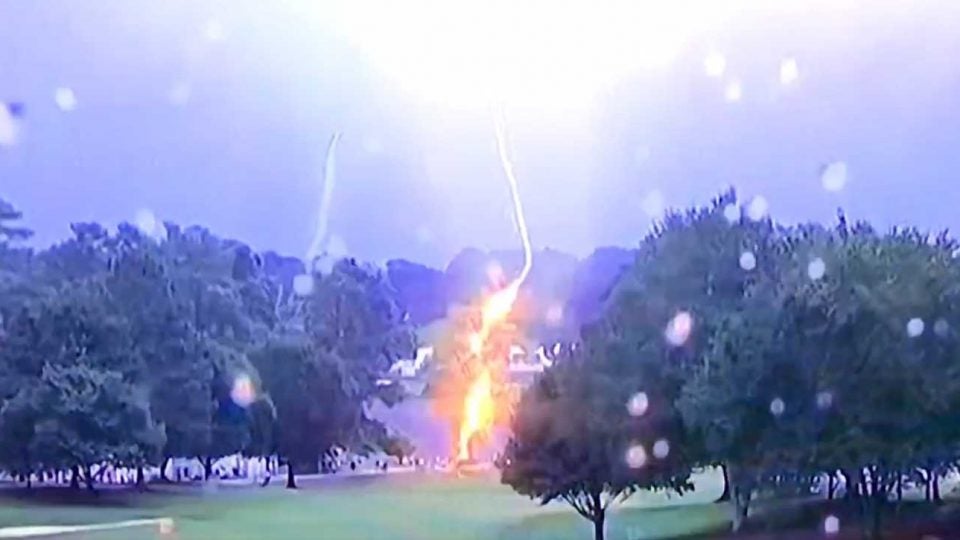 The moment a powerful bolt of lighting struck the course on Saturday at the Tour Championship.

The third round of the 2019 Tour Championship took a scary turn when a lightning strike injured several fans at East Lake Golf Club. Early reports say that none of the injuries sustained are life-threatening. Due to the incident, third-round play was officially suspended for the day and will resume Sunday morning.

Storms rolled into the area shortly after the leaders teed off in the afternoon at East Lake. Play was suspended due to thunderstorms at 4:17 p.m. ET, and players were removed from the course to shelter from the storm.

The lightning strike occurred near the 16th tee 28 minutes after play was suspended at East Lake, according to NBC Sports’ Mike Tirico on the TV broadcast. Tirico later reported that six people were injured in the strike and sent to area hospitals. None of them received life-threatening injuries.

The PGA Tour released a statement following the incident that read, in part, “At 4:45 p.m., there were two lightning strikes at East Lake Golf Club; a tree near the range/15 green/16 tee was hit, and debris from that strike injured four people. EMT tended to those fans and two others immediately and transported them from the property via ambulance for further medical attention.”

You can hear Tirico’s early report, as well as a video that includes the audio of the lightning strike below.

We send our thoughts and prayers to the spectators who were injured during the weather delay at the TOUR Championship. pic.twitter.com/REcxBUIV1H

Here is a slow-motion video of the moment the lightning struck the course Saturday at East Lake.

NBC just showed a lightning strike out at the #TOURChampionship at East Lake that injured possibly 4. This is a slow motion shot of their coverage. Wow! 🙏 pic.twitter.com/0Z1ARb6a8q

The final pairing of Brooks Koepka and Justin Thomas teed off at 3:20 p.m. ET and were only able to complete five holes before the storms moved into the area. The third round will resume Sunday morning at 8:00 a.m. ET, and the the final round will follow later in the day.

Dustin Johnson had mud on ball. Wayne Gretzky shares fun way of how he cleaned it.

Dustin Johnson had mud on ball. Wayne Gretzky shares fun way of how he cleaned it.