When Tony Finau got up to the 18th fairway in Saturday’s round of the QBE Shootout, he saw Charley Hoffman walk past his ball, mistaking it for the tee shot of Finau’s partner, Lexi Thompson. Finau couldn’t help but laugh.

“I don’t know if you guys caught it,” Finau told Golf Channel after the round. “We were on 18. All day Charley was probably outdriving Lexi by 10, 15 yards. Finally get on 18 and they both pound one, Lexi and Charlie pound one down there.

“Charley just walks pass Lexi’s ball as if, ‘Hey, I already know I outdrove her.’ I kind of yell at him, ‘Charley, do you want me to pick your ball up?’ I was standing by Lexi’s ball, and he starts rushing his ball. He looks back and just starts shaking his head. That was quite a funny exchange.”

Thompson’s driving distance had already turned heads during Friday’s first round, when Tiger Woods texted Harold Varner III asking how many times she’d outdriven him. Thompson ranked fourth in driving distance on the LPGA Tour in 2018, with her average tee shot going 272.6 yards. 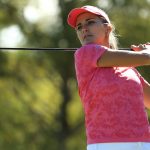 You may also like Tiger Woods to Harold Varner: ‘How many times did Lexi outdrive you?’

Thompson and Finau’s complete games were at work in Saturday’s modified alternate-shot format. Finau hits it so long that when he hit the fairway, the pair would take his shot, leaving Thompson with many of the approach shots.

“I think he missed about one fairway out there, he played some great golf,” Thompson said. “But it is tough to get into a rhythm because you hit the drives, and then I think he putted on every hole. Then I would get a putt into like the 11th hole out there, it was like my first putt. It’s tough to get a rhythm, but we played both really well.”

Hoffman and his partner Gary Woodland surged into a share of the lead at 19 under after Saturday’s eight-under 64. Thompson and Finau shot five-under 67 and sit three shots back going to Sunday’s best ball format.

You can watch Finau’s retelling of the story below: