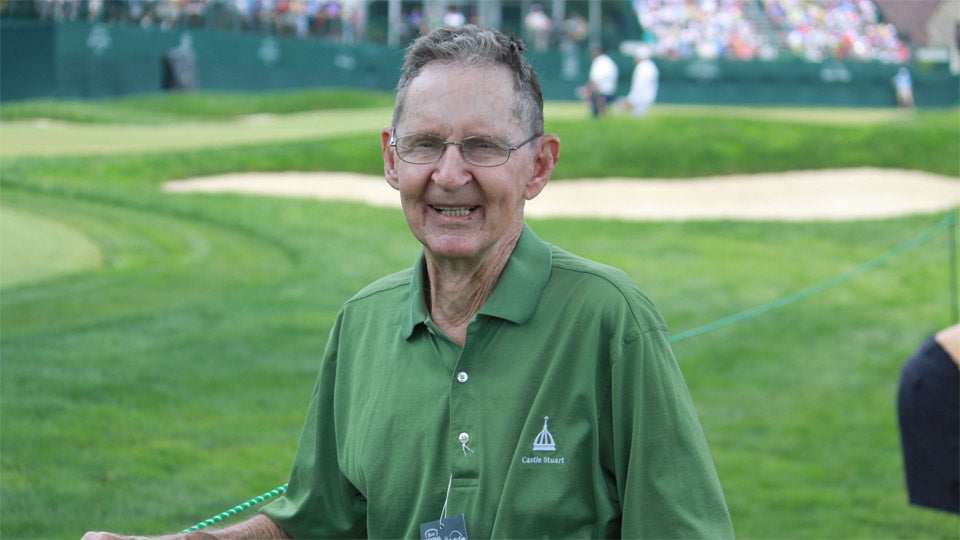 Another member of golf’s greatest generation, Jim Finegan, died on Friday at his home in suburban Philadelphia after a brief illness and some frail years. He was 85. He was an accomplished player with a unique and repeating swing and was an extraordinary voice in the game, both as a speaker and writer. He shaped the lives of an incalculable number of caddies, golfers and American pilgrims looking to discover golf in Great Britain, and he was a beloved figure in the game wherever golf took him.

James W. Finegan, as his name was listed on his seven books on golf and scores of magazine and newspaper pieces, was, of course, not nearly as well known as Jack Nicklaus. But when he interviewed Nicklaus at Doral years ago for a Golf Magazine piece, it became clear to both men that the writer knew more about his subject’s professional accomplishments and near-misses than his subject did.

Alongside Herbert Warren Wind, no other American writer captured the windblown, rugged beauty of golf in the British Isles with such wild enthusiasm. Three of his books about golf in Ireland, Scotland and a third combining England and Wales are indispensible guides not only to the shrines of the game but to lesser-known courses where a visitor is apt to fall in love all over again. If you know the names Golspie, Machrihanish and Cruden Bay, Mr. Finegan’s infectious writing may well have something to do with it.

His history of golf in Philadelphia weighs more than some newborns. He could speak for 20 minutes on Hogan’s accomplishments as a golfer just in Philadelphia without even getting to the 1950 U.S. Open at Merion. The man was, to use a phrase he sometimes used himself, sui generis.

He went to La Salle University in north Philadelphia and is the only golfer in La Salle’s Hall of Athletes. After graduating in ’51, he served in the Navy as a commissioned officer for four years before beginning a long career in advertising in Philadelphia. He won club titles at the Philadelphia Country Club and Pine Valley and won a Navy title in ’53 at Bethpage. As the chairman of Gray & Rogers, a Philadelphia advertising agency, Mr. Finegan’s day often concluded, regardless of the weather, on a nine-hole sprint on his beloved Philadelphia Country Club course. A notably lithe man, Mr. Finegan would change out of his suit and into his golf duds while driving along the Schuylkill Expressway en route to his appointed rounds.

The phrase “greatest generation” has become a catchphrase via various books and films about World War II. American golf’s greatest generation is used here to describe the men and women who came of golf age in the 1950s, when golf was truly a niche sport and people came to it with an almost religious zealotry. For these men and women — Arnold Palmer, Mickey Wright, Herb Wind and Jim Finegan would be notable examples — golf had nothing to do with getting rich. For Mr. Finegan, golf was a place to practice good manners (his were exemplary), apply military discipline to a decidedly nonviolent game, and to practice independence. Like many of his generation, Mr. Finegan first came to golf as a caddie, at age 11.

Jim Finegan was married for 62 years to a woman who never struck a golf ball in her life but accompanied her husband on many of his trips to the British Isles. In addition to his wife, Harriet, Mr. Finegan leaves three children, seven grandchildren, two great grandchildren and a brother and sister. There will be plenty of golf artifacts for all of them, and thousands of manuscript pages, notes and clippings in dozens of crates in the family home in Villanova.

As a voice in the game, both oral and written, Mr. Finegan’s will never be imitated. There was no such thing as a casual game with him. If an opponent happened to hit a 4-wood from a fairway trap onto a distant green, Mr. Finegan might exclaim, “Can’t be done any better!” To the escalating green fees at, say, Pebble Beach, he might say, “A scandal!” Once, playing the 16th hole at the Philadelphia Cricket Club, he stood on the tee and said, “Nothing less than the quintessential American dogleg par-4 left — nothing less!” If he ever ended a sentence without an exclamation mark, it went unheard.

Mr. Finegan was nothing less than the embodiment of all that is great about a game that captures so many of us. If you have someone in your life who enhanced your appreciation for golf, then you knew Mr. Finegan and if you didn’t you knew what he was all about, anyway.