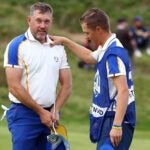 Lee Westwood and his son, Samuel Westwood, on Sunday at the Ryder Cup.

No pro golfer ever wants to take a Ryder Cup for granted, but most aren’t oblivious enough to think they are guaranteed to be back again. Lee Westwood had that realization on Sunday night at Whistling Straits.

The Europeans had a roster with four players in their 40s, and this was perhaps the last Ryder Cup for a couple of them. After Europe’s 19-9 loss to the U.S., those players were asked if they let this one soak in a little more, just in case it was the last.

Sergio Garcia wasn’t ready to answer this question, not yet. But Westwood did.

“Listen, this match I played this afternoon, it might be the last match I’ve played in the Ryder Cup. I’d rather it wasn’t, but I’m 49 next April, and the likelihood is it is. I got to share it with my son. Won my point,” Westwood said, before his emotions took over. He teared up and paused as his team started clapping. He continued about 10-15 seconds later. “I hate this tournament. It makes you so emotional, but that’s what makes it great as well. Everybody knows when they tee up in the links-style golf course, Ryder Cup, it’s a lottery. You have a chance of winning but it’s not guaranteed. Like roulette. But they are special moments out there. You know, we get to represent Europe out there this week. It’s a big place. The other team gets to represent the USA. Big place. Represent a lot of people. If you haven’t got pride and passion, then it’s not for you. Don’t even bother turning up.”

Westwood has now played in 11 Ryder Cups, tied with Nick Faldo for the most all-time among Europeans (only Phil Mickelson, at 12, has played in more). Westwood’s career mark stands at 21-20-6. He was 0-2 through the first two days at Whistling Straits, but he beat Harris English 1 up in singles. Westwood, even if he doesn’t play another Ryder Cup, is all but guaranteed a captaincy in the future.

Westwood and Garcia haven’t been on many losing Ryder Cup teams, but they were still asked what they learned from the week.