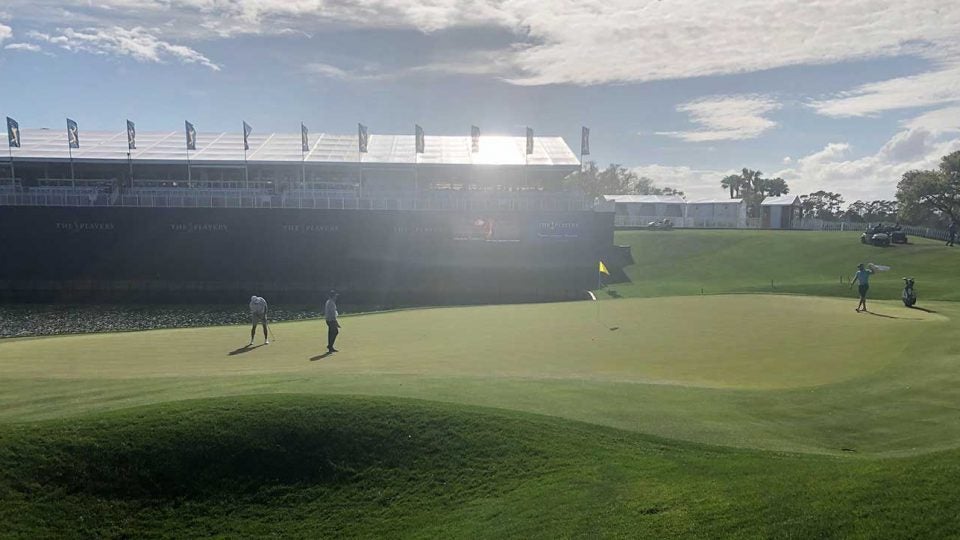 My private viewing of Dustin Johnson as he finished out on 18 at TPC Sawgrass.
James Colgan

PONTE VEDRA BEACH, Fla. — I wish I could say I’d done it on purpose. That I’d known Dustin Johnson, in beige Bermuda shorts and a checkered, seafoam green Adidas shirt, would be making the walk to 16 at TPC Sawgrass around 4:30 p.m. Monday. That I’d carefully chosen my exact spot among the trees and the pine straw on the left side of the 16th fairway, knowing Johnson would be eager to challenge the 523-yard par-5 for every last inch. That I’d waited patiently for the ball to thud against the trees above me before it dropped at my feet.

I did none of these things.

I actually strolled down the left side of the 16th fairway partially blinded by the sun, squinting in the distance. I made out a figure, tall and athletic, standing on the tee box. I heard the man make contact. Then I heard the ball strike a tree above my head, landing softly on pine straw close enough for me to make out “TaylorMade.” A minute later, Johnson strode toward me, simultaneously in the midst of a phone call and a practice round. I pointed sheepishly toward his ball and looked around. I was the only person near DJ (spare for his trainer, swing coach, and caddie Austin, who is also his brother) as he loosely played one of golf’s all-time great closing sequences.

Sometimes the story literally drops itself at your feet. And as a green, newly credentialed golf journalist fresh out of college, I wasn’t going to miss this chance to be a fly on the wall. Here’s what I learned.

News
The Players Championship odds to win: Rory McIlroy on top once again

1. As one offensive coordinator famously said…

I was caught off guard when Johnson, mid-phone call, picked up his ball from the pine straw, reared back and tossed it to Austin in the middle of the fairway. So much for playing it as it lies.

The sequence reminded me of Jon Gruden’s famous Peyton Manning story. At a practice back in Manning’s heyday with the Colts, Gruden asked offensive coordinator Tom Moore why the backup quarterbacks never practiced.

The same was true for Johnson. His score was irrelevant, and he wouldn’t learn anything about the course playing a rescue shot out of the trees. He was out to learn yardages and regain his feel for certain shots.

It gets lost when you’re among hundreds of fans, but there’s a noise that accompanies a pro’s golf swing. First, the whoosh of the club physically moving the air around it. Then, the thwack of impact, which sounds like a dozen marbles simultaneously falling on concrete.

As Johnson stood in the middle of the fairway hitting 240-yard iron shots into different tiers of the green, the noise seemingly sliced through the air. It’s true, you can hear the difference between amateurs and pros (as if seeing their shots weren’t enough).

3. The island green looks a lot larger when it’s empty

The tee shot on 17 at Sawgrass is terrifying, but it loses its teeth when a 20-time PGA Tour winner is playing for giggles. After maybe 15 seconds of conversation, Johnson hit a smooth wedge to the fat part of the green, leaving less than 10 feet for birdie.

For a tee shot that drives more interest than most in golf, Johnson was routine, even bored with his.

News
Players Championship picks to win: Why you should keep an eye on Jon Rahm

DJ essentially played 18 twice, producing two vastly different results. His first tee shot was conservative, taking the water out of play but limiting his view into the green. His second shot was quite the opposite. After some talk with Austin, DJ smashed a three-wood that came within inches of the water but safely found the left side of the fairway, a prime look at the green.

He then hit four approaches, two from either ball, targeting two tiers on the green. He putted to two different locations, one where the hole was cut, the other to a marker placed on the other end of the green. After he’d finished putting out, he went to the back of the green and hit a series of chips to a marker.

The whole sequence looked a bit odd from a distance, but Johnson was looking ahead. He was preparing for the setup he expects to see, not the practice round setup he got. This happens every practice round on the PGA Tour, but there’s something fascinating about watching it in person.

It was a routine Monday for the fifth-best player in the world, save for one thing. Walking off 18, he motioned toward me and asked a single question to the new guy on the golf beat.