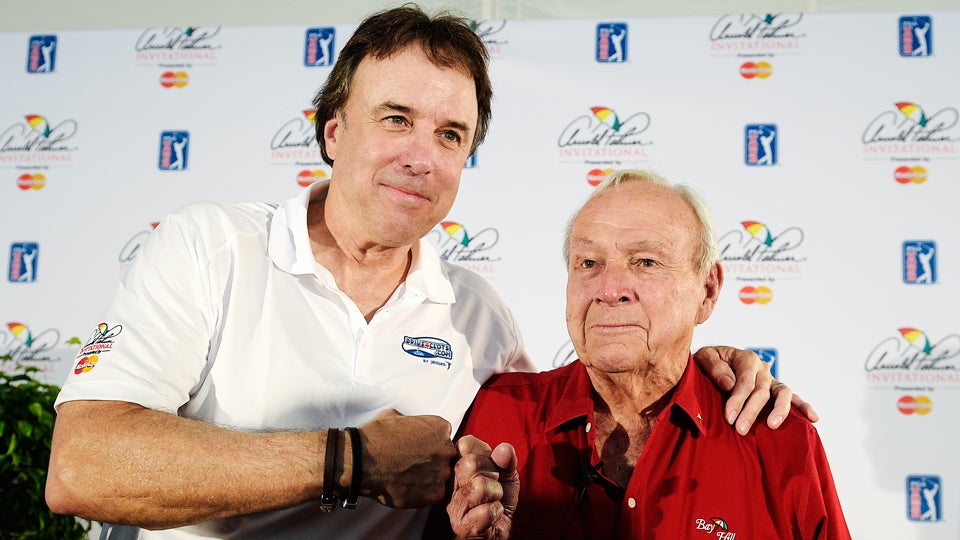 Ex-Saturday Night Live star Kevin Nealon serves up his best John Daly story and explains how he landed a role in Happy Gilmore. Nealon will play in the American Century Championship on July 19-24 at Edgewood Tahoe in Nevada.

There’s a joke that golf is a game for people who don’t hate themselves enough in their daily life. Comedians say similar things about doing standup. Do you see a parallel there?

You know what, now that you mention it, there certainly is.  It’s kind of like if you didn’t do well on one hole, you have the next hole. It’s the same with a joke. If one joke kind of bombs, you move on to the next joke pretty quickly and forget about the next one … and both of them have hecklers.

You live in California now, so do you have a home course, are you a member of a club?

I’m a member of the Studio City Driving Range. They have a nice little par-3 AstroTurf course and driving range. You know, I don’t belong to a course because I don’t golf that much, so it’s not worth it for me to join a club. I feel guilty, when I’m not golfing I feel like I should be golfing. And when I’m golfing, I feel like I should be home working or spending time with the family. So it’s a real conundrum.

You played one of my favorite characters in Happy Gilmore. How did you get hooked into that?

I met Adam Sandler through Saturday Night Live, and we became friends.  That was the first film I did with him. It’s one of my favorite golf films, in that I’m more of the psychic,  his guru on the greens, trying to get him in touch with the spiritual games. A lot of that was improv.

Do you ever get people saying that stuff when you’re playing?

Oh yeah.  They say, “Send the ball home! Feel the flow! It’s circular!” You know that’s a good character when people keep bringing it up.

What character do you get most in public?

Probably Hanz and Franz or Mr. Subliminal. It’s funny how long-lasting those characters are. I left that show 20 years ago. Pop culture, and pop culture on the internet now, they play it so much people who weren’t even born when we were doing that, know about it now.

If you could play in your dream foursome, who would in it and where would you play?

Well, Tiger Woods would have to be in the mix. I’ve done this commercial with Arnold Palmer. He  doesn’t play that much anymore, but it’d be fun to have him in the cart.  And then Dustin Johnson might be good. Or [Rory] McIlroy. Yeah, I think McIlroy.

It doesn’t have to be pros.

Well then, Scott Hamilton, Adam Sandler – he doesn’t play that much anymore – and probably Norm McDonald. We would play at  probably the Ocean Course.

The best time you ever had in a pro-am, who was it with?

I think it was probably with John Daly at the Bob Hope Classic. I don’t know if he was in a good mood that day or what, but he was having a blast. And I remember I was late. My son was just born, and my watch had stopped. I didn’t know what to say to him, but I knew Daly’s background. So I got up to the 1st green and I said “Gosh, I’m so sorry, I was out late last night, I was so hammered. So I was hungover this morning, but I’m here now.”  He smiled, patted me on the back and said “Don’t worry about it.” I knew he’d understand.