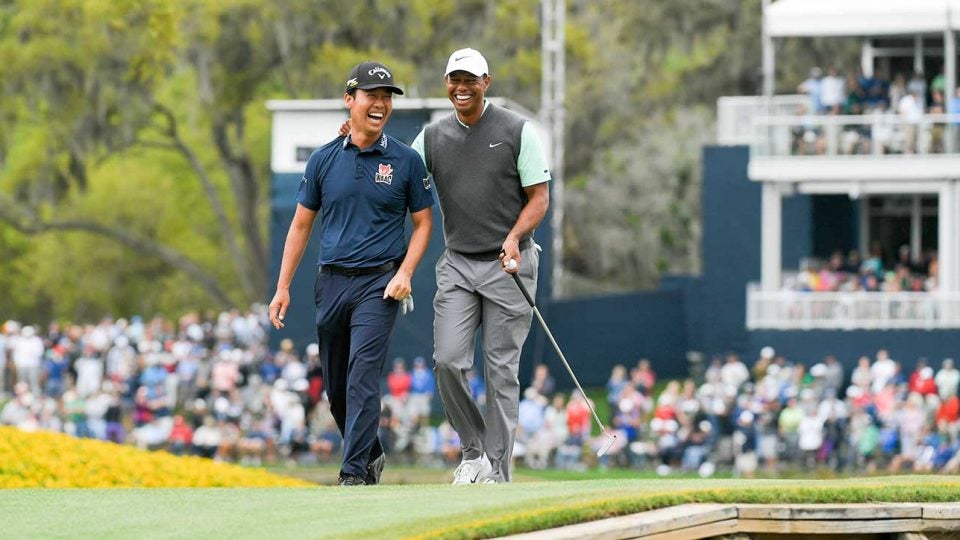 Tiger Woods and Kevin Na walk off the 17th green at TPC Sawgrass during the 2019 Players.
Getty Images

Kevin Na is a four-time PGA Tour winner, with his latest victory coming at the Shriners Hospitals for Children Open last week. He recently sat down with Ryan Asselta to discuss his career, his autograph collection and more.

Ryan Asselta: You’re a multiple winner on the PGA Tour, you’ve been playing full time on Tour for the better part of 16 years now. Is there ever a moment that you have pinched yourself and thought how lucky you are?

Kevin Na: I remember I had a moment on the back nine in my first Masters, which was back in 2010. I was walking off one of the tee boxes and I looked at my caddie, and I said, If someone from the future came to me as a kid and said, ‘Kevin, you’re gonna play in the Masters one day,’ I would’ve been one happy kid. It’s amazing. I’ve now played in eight Masters and been on Tour for almost twenty years. It’s amazing.

I hear you like to collect golf memorabilia? What’s your most prized possession?

I do! I have 2001 Masters pin flag signed by Tiger Woods.

How did you get that?

Well, I always buy a flag from every major I play, hoping someday I’ll win and get to sign my own flag. So, I always get the flag signed by the winner. But all of the majors I had played in, Tiger had never won any of them, so I didn’t have major flags signed by him. So, a few years back, I was in Las Vegas, at Red Rock Country Club and I see this 2001 unsigned Masters flag hanging up on the wall. There were about 50 flags, and I remember that one grabbing my attention since I knew Tiger won that year. So, I think this was 2013, I call up the club and say, Hey, any chance you would be willing to trade me that 2001 blank Masters flag? I knew Red Rock was a Jack Nicklaus designed golf course, so I told them I’d get an autograph by Mr. Nicklaus on a Masters flag in 2013 and trade it with them. They said, ‘Done deal!’

Rules
Rules Guy: Can you take a practice swing with a tee in the fairway?

So, were you able to pull off the trade?

Where do you keep it?

Oh, it’s framed and hung up on the wall in my house. I’ve got this hall in my house where I’ve got four majors’ flags. One of them is Tiger’s Masters, one is the 2005 PGA Championship, which was the first major I played in, signed by Phil Mickelson. Then I have my best finish, the U.S. Open at Oakmont, and then one from St. Andrews since it is the Home of Golf.

You mentioned getting Jack Nicklaus’ autograph. I know you’ve spent time with him at the Memorial. Have you ever gotten any advice from Jack?

Yes, I remember having lunch with him. And I said, Mr. Nicklaus. What is the key to winning a golf tournament down the stretch? He said ‘You can’t force it. You’ve got to let it happen. You can’t be over a putt and think that I have to make this. You need to just let it happen.’

Have you been able to take that mindset into your game?

No, I said it’s easy for you to do that because your Jack Nicklaus! [Laughs]

How do you think Jack’s game would translate into this era of the PGA Tour?

I think he’d do just fine. He was a long hitter. And every great player finds a way to get it done. And the mental edge he’s had over the other players, he would still have. I think he would still be No. 1.

Is that the one thing, that you would want to take from his game? The mental edge?

Good thing you have both of their autographs.

Yep. Framed on my wall. [Laughs]