Keegan Bradley How He Got to Kapalua: Won the HP Byron Nelson Championship and the PGA Championship
Fred Vuich/SI

It didn’t matter that it was their last hole of the week, Keegan Bradley and Miguel Angel Jimenez had a lot to discuss during the final minutes of their match Friday at TPC Harding Park.

The two got into a heated argument that was aired on the Golf Channel telecast when Jimenez supposedly reminded Bradley that he needed to take two club lengths before dropping his ball for relief on the 18th hole. That didn’t go over well, and at one point you can hear Bradley’s caddie, Steven Hale, tell Jimenez, “Do not tell me to shut up!” Bradley then got in Jimenez’s face to say, “Don’t tell him to shut up!”

“It was just a heat-of-the-moment thing,” Bradley told reporters afterward. “It was disappointing. I’m pretty bummed out about it. It was just … I had a ruling and he felt like he needed to intervene and I felt like he was being inappropriate to me and my caddie.

“I have nothing but respect for him. He’s a great player out here, but I have to be able to stick up for myself when I feel something is wrong.”

Jimenez led 1 up versus Bradley heading into the 18th, and Jimenez took the match 2 up for his only win of the WGC-Cadillac Match Play. Bradley finished 0-3. 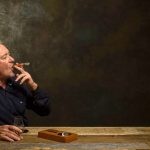 You may also like A conversation with Miguel Angel Jimenez

After Jimenez won, he and Bradley talked briefly on the green, but it didn’t seem as if anything was settled by the time they walked off.

“Whatever he say, now is finished,” Jimenez told reporters. “The round is finished and everything is done. We had a little discussion, but it is done.”

There was also a ruling on the 13th hole that the two supposedly discussed at length that could have spurred what happened on the 18th.

Here is a clip of part of the exchange, via BuschLeagueSports.com.

And to think, they used to be such great friends?

On range after my round Miguel a Jimenez walked past me with aviator sunglasses, cigar and bottle of wine. Maybe he is the coolest man alive